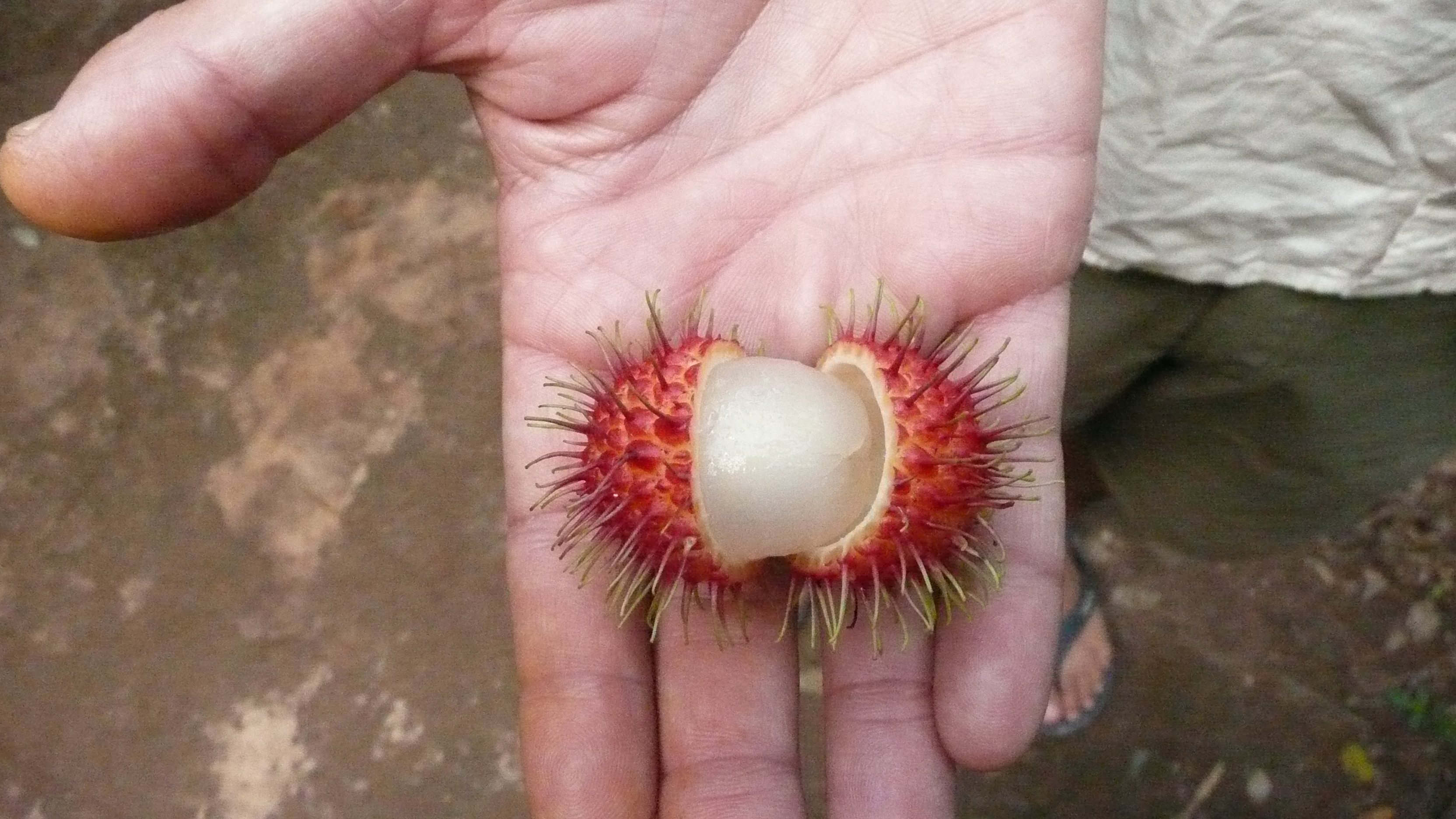 Before setting out on our world adventure I had decided to use this trip productively to learn all I could about the cuisines of the world. My plan was to take an occasional cooking class and sample the variety of yummy things each unique country had to offer. Eight months into the trip and I’ve only managed a week long cooking course in Peru and with our budget stretched so tight the serious wining and dining I had dreamt of has been sparse. We have, however, taken full advantage of all the wonderful street food on offer, and have, none the less, had incredible meals along the way.

We started the trip off right with a three day stop in the country of El Salvador. Meant to be just a lay-over on our way to Costa Rica we stretched it out a bit and spent our time sampling what was to be had on the streets, in markets, and seaside restaurants. The star of the show, and still one of our culinary highlights, was the papusa. A thick masa tortilla stuffed with a range of various filling, the squash blossom and zucchini was my favorite, Jeff preferred the chicharon. We tried the famous mariscada (creamy seafood soup), fried fish, and snacked on crisp plantain chips sprinkled with chili and lime. 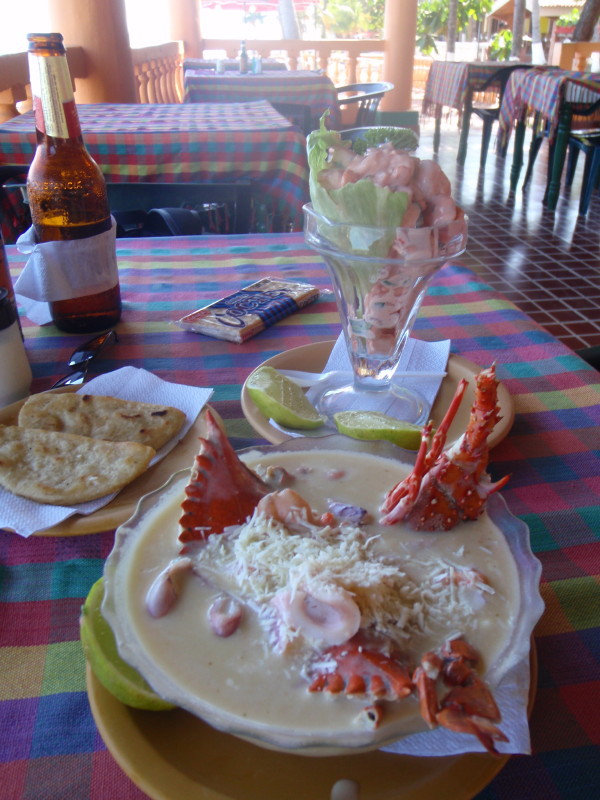 Moving on to Costa Rica, in my opinion not one of the most interesting places to visit for their food, we contented ourselves with cooking at home with the aid of the fantastic Mancha’s chicken. A small rotisserie place that turned out dozens of succulent, smoky chickens every day. We used them for enchiladas, soft tacos, made salads and sandwiches, and rolled them into taquitos topped with crema and guacamole.

Next stop, a gem of a country for the hungry traveler, Peru. With such a unique cuisine Peru was a great place to settle down and take a week of cooking classes. We headed out every morning to the fantastic market in Huancayo then back to the kitchen to prepare our meal for the day. The highlights of the week had to be the deep friend guinea pig (cuy) served with a spicy peanut sauce somewhere between the Thai version and a Mexican mole, and the aji de gallina, chicken topped in a creamy sauce made of fresh cheese and the indigenous yellow chili. We learned how to make the national drink chicha morada, An interesting concoction of blue corn and sugar spiced with cinnamon served chilled. In Lima we dined on ceviche and chupe de cameron (a creamy prawn soup thickened with rice). At Lake Titicaca we had fresh trout and the lovely colonial city of Arequipa for some reason was full of delicious falafel stands. 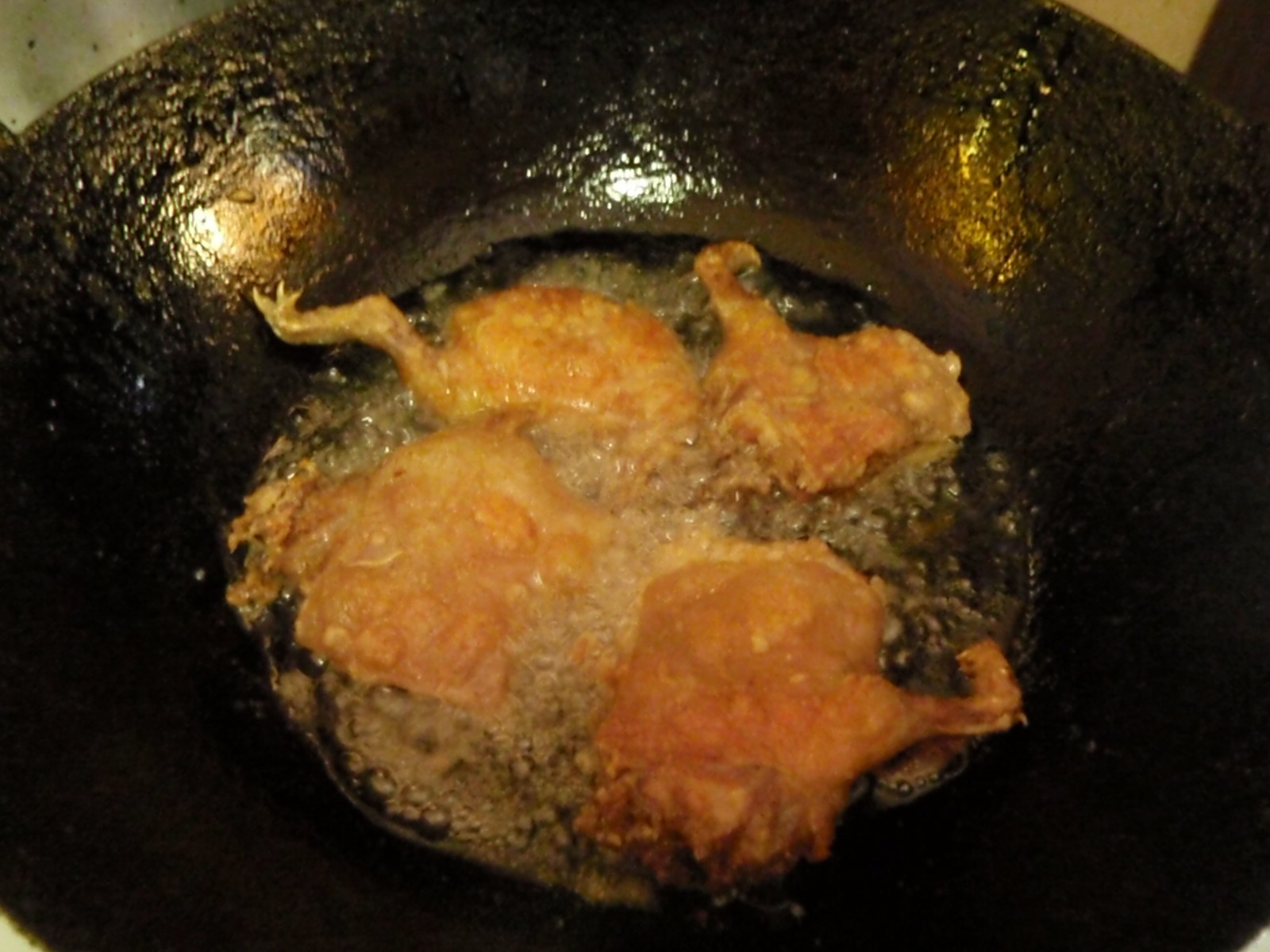 Chili was another bleak country for the pallate. The northern beach towns were filled with street stalls selling salcipappa, soggy French fries topped with chopped up hotdogs. As we headed south the options slightly improved, but still unable to find much to appease our taste buds we comforted ourselves with bottles of Chili’s famous red wine instead. 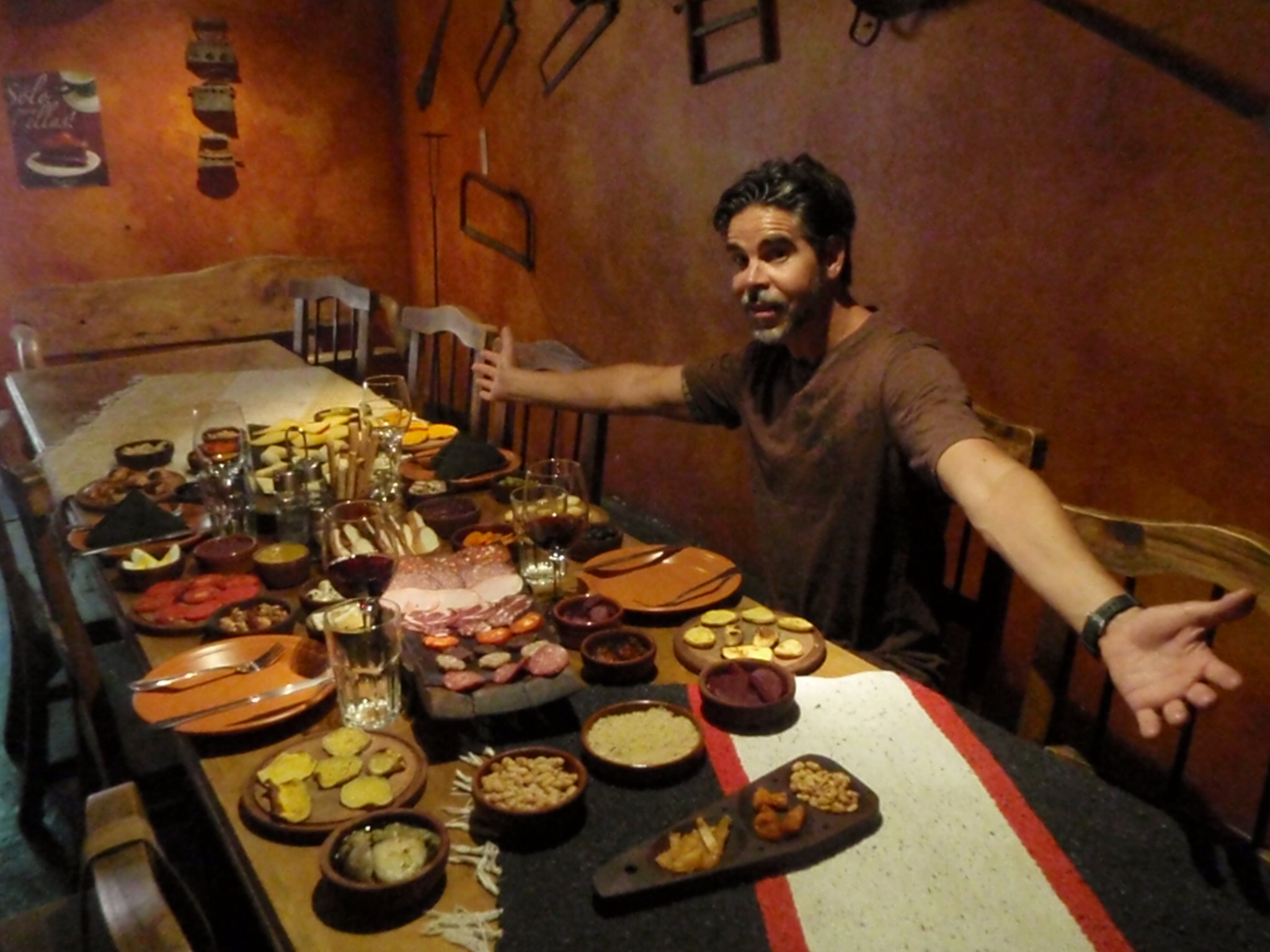 On the other hand Argentina is a meat eaters paradise – tender steaks and blood sausage, sweetbreads, and any other part of the bovine body thrown on the grill served up with a glass of juicy red wine. We ate empanadas so flakey stuffed with stewed chicken or spiced ground meat. The strong coffee was also much appreciated after suffering through nescafe for the past two months and the Italian style gelato (especially ruby grapefruit) was divine in the summer heat. 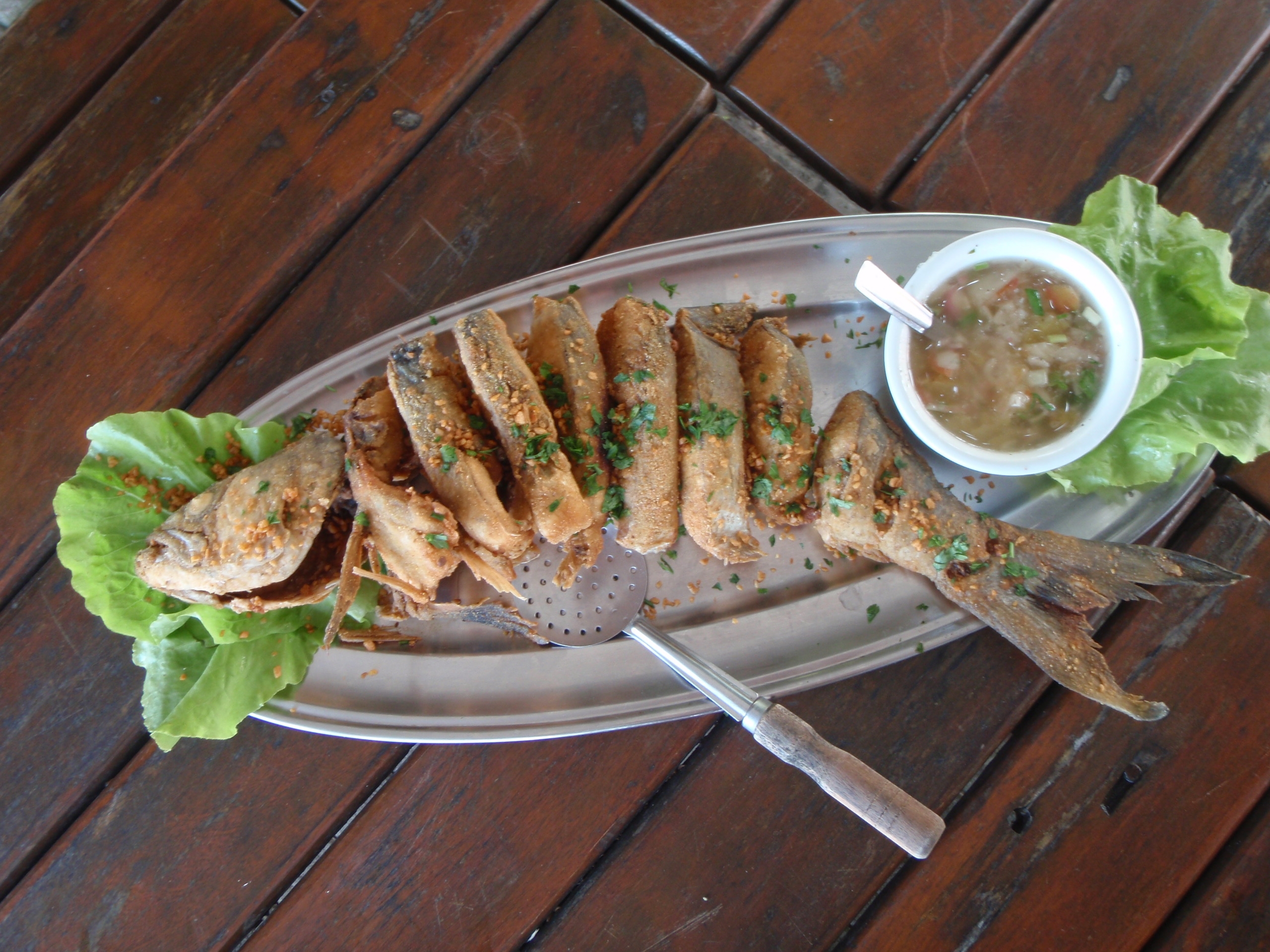 Brazilians seem to like things fried. On the island of Ilha Bela we had fresh whole fish deep fried and sprinkled with fried garlic, Fried calamari and fried croquettes with cheese and shrimp, all washed down with the national caiprinha, a cocktail of sugarcane rum, fresh lime and sugar, sometimes with a dash of tropical fruit. 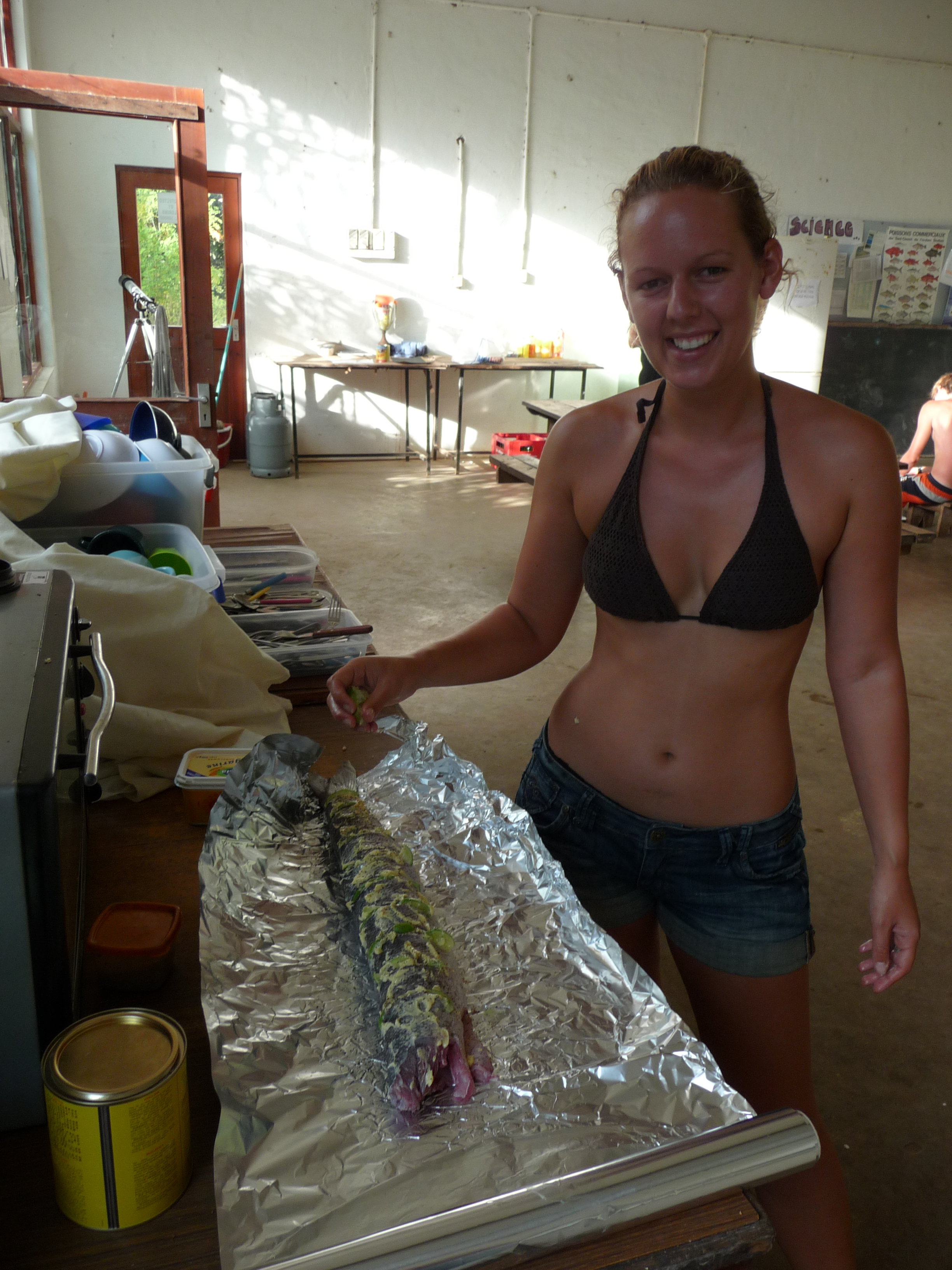 Fry a chopped onion with a little sugar until lightly browned add a head of chopped garlic and about a 4 inch piece of grated ginger, continue to fry and add 2-3 cans of tomatoes a little more sugar and a little tomato paste. Add salt and pepper and curry powder to taste. Serve on grilled fish.

Across the Atlantic the cuisine of the Seychelles was interesting with the islands rich Creole culture. Ginger and garlic are used in profusion and fresh creamy coconut milk thickens the fish curries. The island is covered in little take-away spots selling dishes such as spiced rice, fish samosas, octopus curry, stewed goat and creole lentils. Bat, or flying fox, was a specialty that we never had the chance to try, we were told, however, that it is hard to eat with all the little bones and tasted a bit like chicken. One of our duties at the GVI base was cooking for the other 25 volunteers and staff and we were forced to get creative with the limited supplies on hand. We managed to cook lentils 100 different ways and the breadfruit fried into chips were very tasty. Luckily fresh fish was in abundance and grilled up with Hazel’s Creole sauce and a side of chapattis, we were eating like kings. 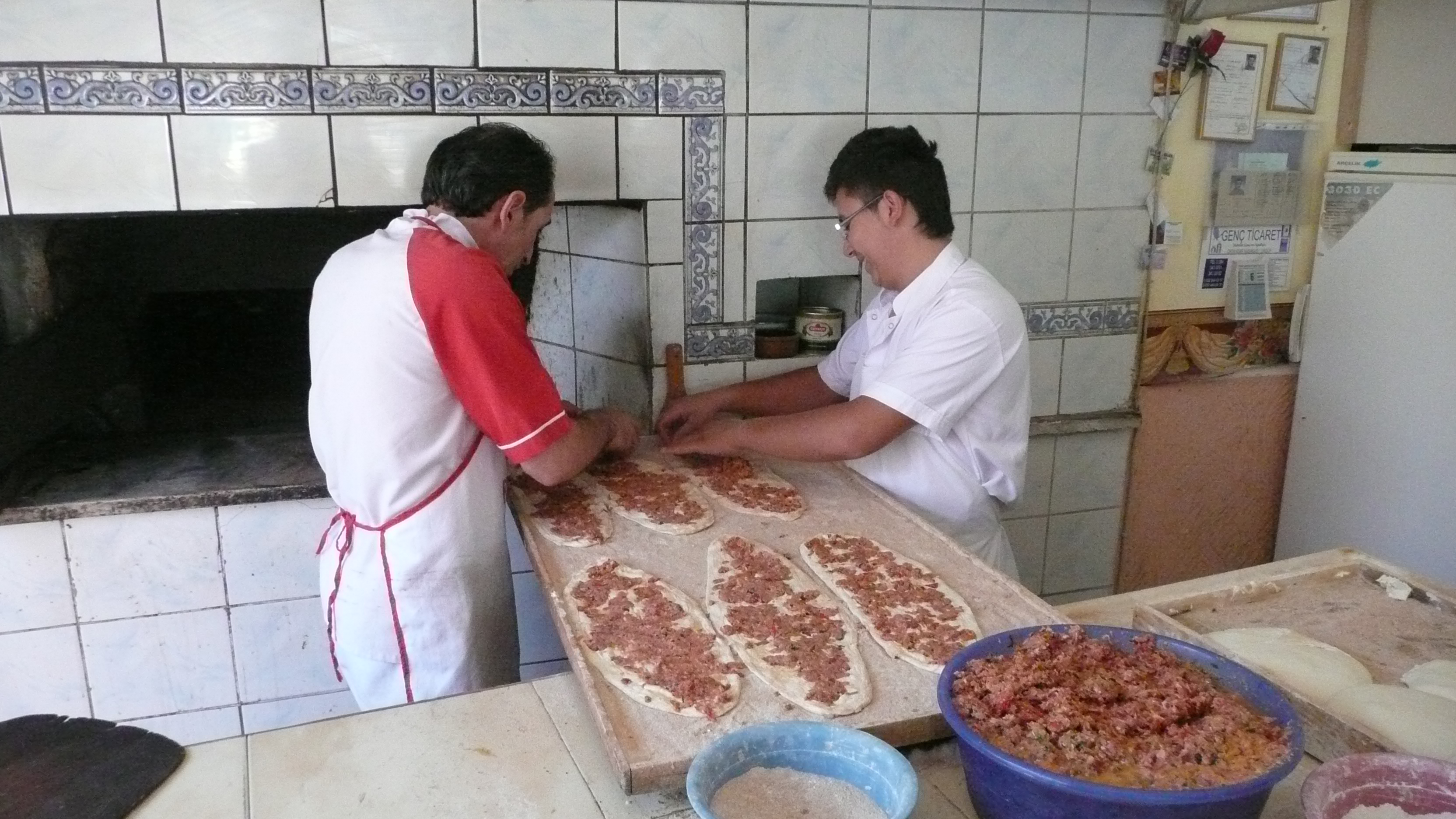 We continued our culinary adventure on the African Mainland starting in Kenya with fresh roasted peanuts we bought from the street vendors served in paper cones. I think you haven’t had a peanut until you’ve had one in Africa. The markets were filled with women frying up chapattis and men grilling up skewers of various meat. Crossing into Uganda the roads were lined with enormous bunches of red bananas, known for their sweetness. We were lucky to have Mwai, our Kenyan cook on safari, cooking us his infamous coconut lentils and sautéed kale. Further on we reached the spice island paradise of Zanzibar. I was in heaven with the liberal amount of spices used in everything from the rice to the coffee. We visited a spice plantation were we sampled fresh turmeric, munched on clove leaves, ate fresh lychee, cracked open fuit to reveal nutmeg at its center and pealed cinnamon bark straight off the tree. The rice pilaf was the base of every meal studded with cardamom and cloves and again coconut milk was used widely in dishes as simple as stewed red beans. My obsession for chapattis continued with gusto in Zanzibar, by far the best I’ve had. Rolling the dough into a coil before flattening them into thin rounds and pan frying them on a open flame, the end result is the most delicate, flakey flatbread, perfect on its own as you stroll the narrow back streets of Stonetown. Zanzibar is also host to a bustling night market where tables are covered with skewers of octopus, shrimp, mussels, barracuda and a variety of other fish waiting to be grilled, chefs in their towering hats prepare the Zanzibar pizza, a dough stretched as thin as possible topped with meat, cheese, tomatoes, onions and an egg then fried to crisp. Adjacent to the pizza stall men pressed out every last bit of juice from a stalks of sugarcane with ginger and a squeeze of lime. After a night at the market we would end the evening near our hotel with a spicy sweet brew of ginger tea and watch as local life went on around us.

A flight to the north of the continent and the food couldn’t be more different. Egypt is not known for its cuisine, but what we had did not disapoint. I’ll start with the fruit juices’…stalls with a myriad of fresh fruit were practically on every corner. The lemon with a hint of fresh mint was the best possible thing when the weather was unbearable. We were able to eat falafel sandwiches’ for less then a quarter and the staples of hummus and babganoush were always fresh. Olive oil was used in abundance as the Mediterranean influences began to show and fresh salads of tomatoes and cucumber accompanied every meal. 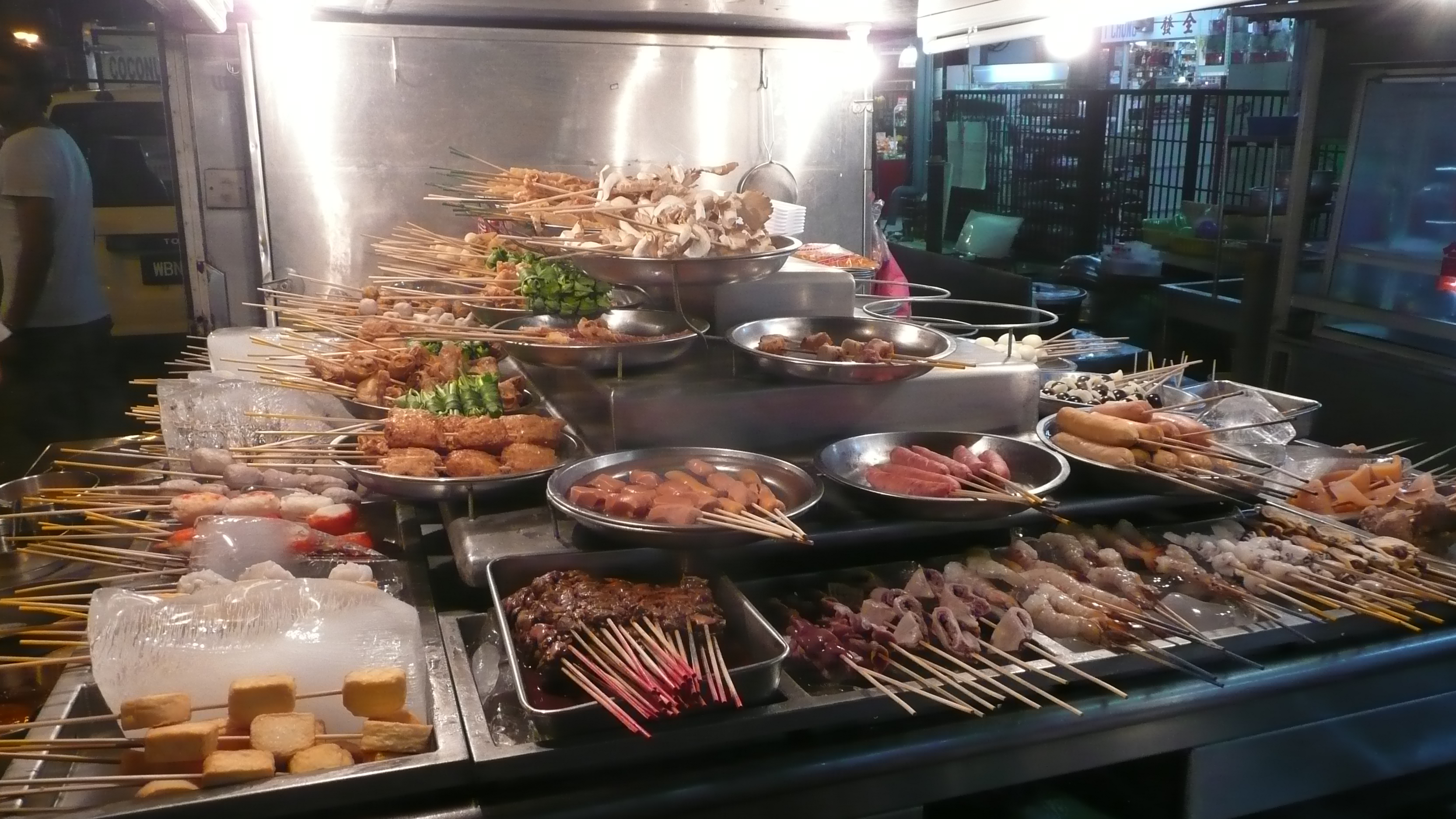 Traveling on into Jordan there were subtle changes, more yogurt and lebneh, the use of fresh thyme and mint. In the dessert of Wadi Rum our Bedouin guide cooked us a meal of chicken and potatoes with rice buried under the sand, such simple goodness. We had one of our best meals in the town of Madaba at Haret Jdoudna, set in a restored old house we sat on the terrace dining on fried eggplant topped with mint, Kibeh (balls of bulgur stuffed with spiced lamb and fried), fresh goat cheese drizzled with olive oil and sprinkled with thyme, and fresh lamb sausage so perfectly spiced and sautéed with preserved lemon and garlic all accompanied by a fantastic Sauvignon Blanc from the same region. 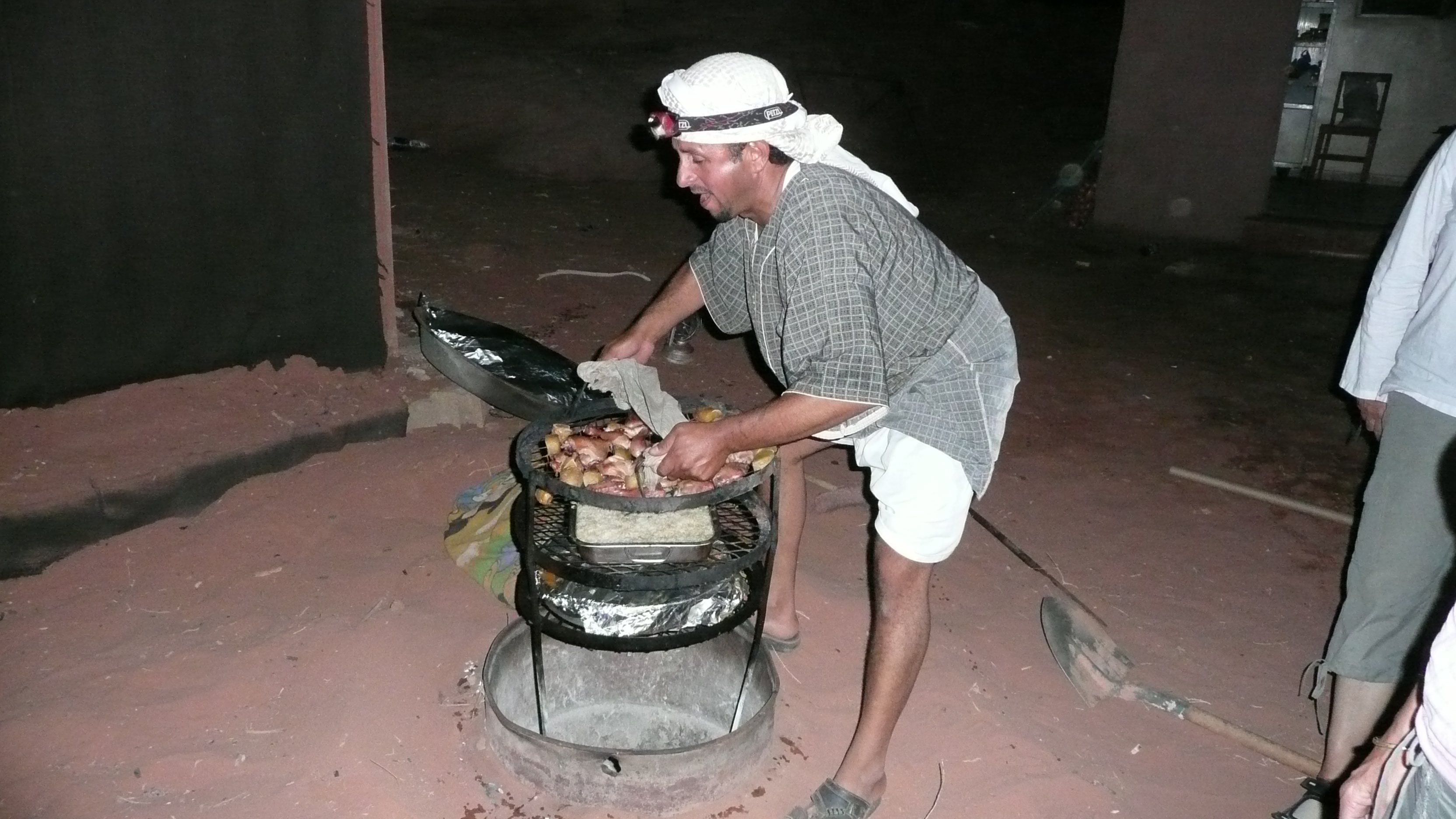 Moving up into Syria the food got even better. Flatbreads topped with ground lamb and minced olives were sold in corner bakeries. Muhamara, a dip of ground walnuts, roasted peppers and pomegranate began to show up with the usual mezzes. Spice markets were filled with piles of sumac and Aleppo chilies, dried flower blossoms, and purple and green pistachios. Men on the street were selling fresh blackberry juice, and ayran, a salted yogurt drink, was on every table. 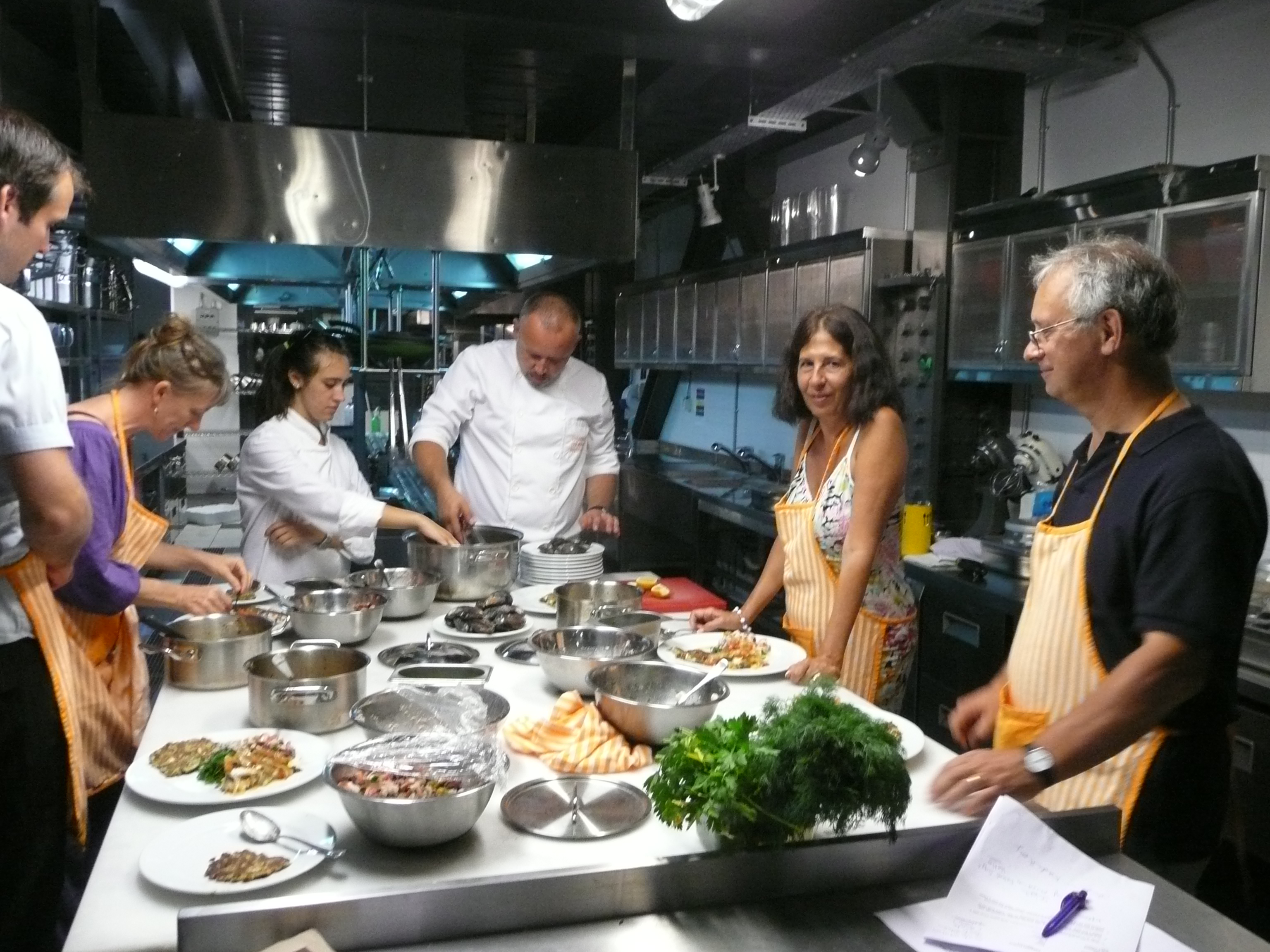 We’ve now made it into Turkey and the food has been fantastic. In Cappadocia we ate pide, Turkish pizza with a variety of toppings, night after night. The ground lamb with mint and onion is always a good bet. In Konya we stumbled upon a group of ladies rolling out fresh Gozleme, a hand rolled pastry, they then stuffed them with potatoes and mint and further south in Kas we dined on fresh fish. That brings us to Kabak were we are spending our days high on a cliff overlooking the Mediterranean and Fatih, the owner of our pension, The Olive Garden, cooks us dinner every night with the fruits and vegetables from his garden.

Click here to see Jeff’s “Beers of the World” album.