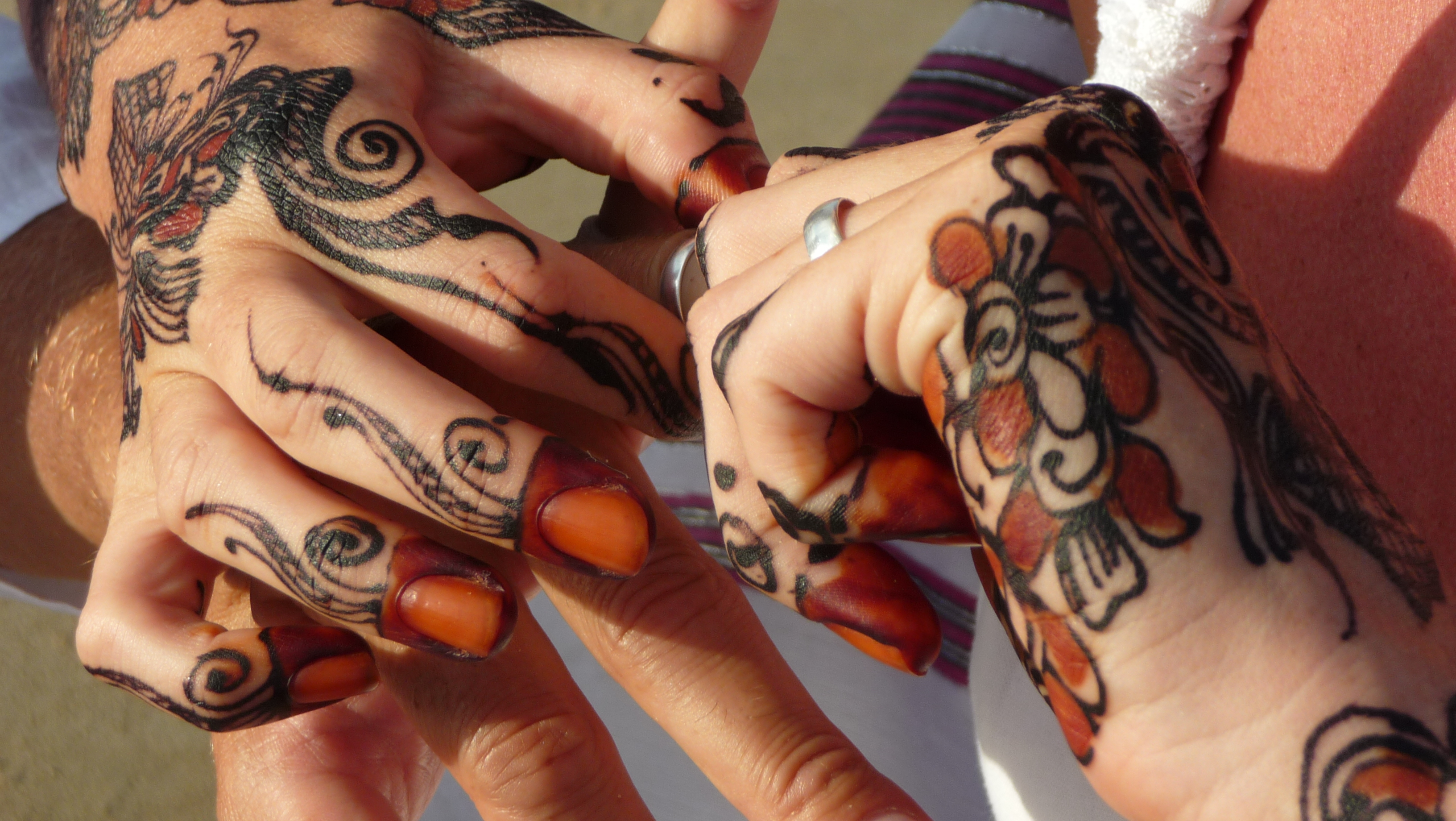 Just a few weeks before leaving the Seychelles Jeff and I decided to get married in Lamu, an island off the northern coast of Kenya. We always knew that we would tie the knot on this year long journey, but deciding where and when was another story. Looking at destinations in Africa months before we left the States I had discovered the Lamu House hotel, with its Arab elegance it had intrigued me and I knew we had to visit both the hotel and the winding narrow streets that make up Lamu.

The idea of planning a wedding in a place we had never visited in such a short amount of time seemed a bit daunting, however, after corresponding with the new Lamu House owners, Frank and Marianne, we knew we were in good hands. They had so many great ideas and made us feel assured that we would be able get everything organized in such a short period of time. When we first arrived we had no idea of when or where the wedding would take place, who would perform the ceremony, or what we would even wear. We didn’t even have rings! It didn’t matter, we were ready to go with the flow. Prior to our arrival Frank had already requested a marriage license from the District Commissioner’s office and made arrangements for our ceremony, Marianne had arranged with Slim, the local silversmith, to make our rings and found a place where I could have a dress made and something for Jeff in just one day, and Sheila, at the front desk, found the best henna artist on the island. 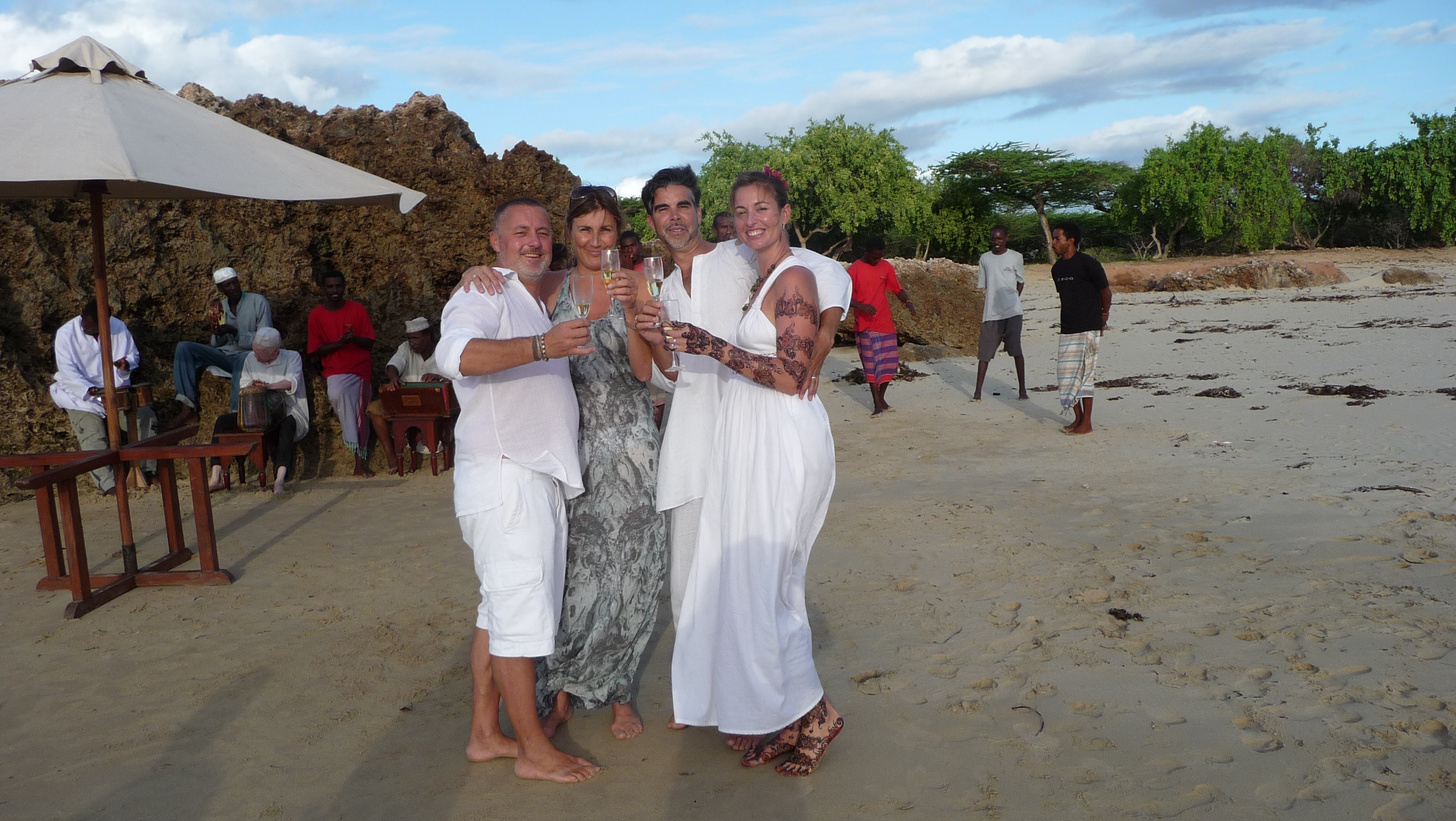 With our gracious hosts Frank & Marianne

The tropical storm on day one slowed our progress, since no one opens their doors when its raining, but I was able to coax Amina, the henna artist, over and spent 5 hours sitting very still while drinking Swahili tea as she created beautiful designs covering my arms and legs in traditional Swahili fashion. The rain eased the following day and we were ready to get things moving. We met with Slim and choose our wedding bands, had Jeff fitted for a pair of pants, and I met with an expat designer and had a fantastic dress made all to be finished in time for the ceremony the next day. 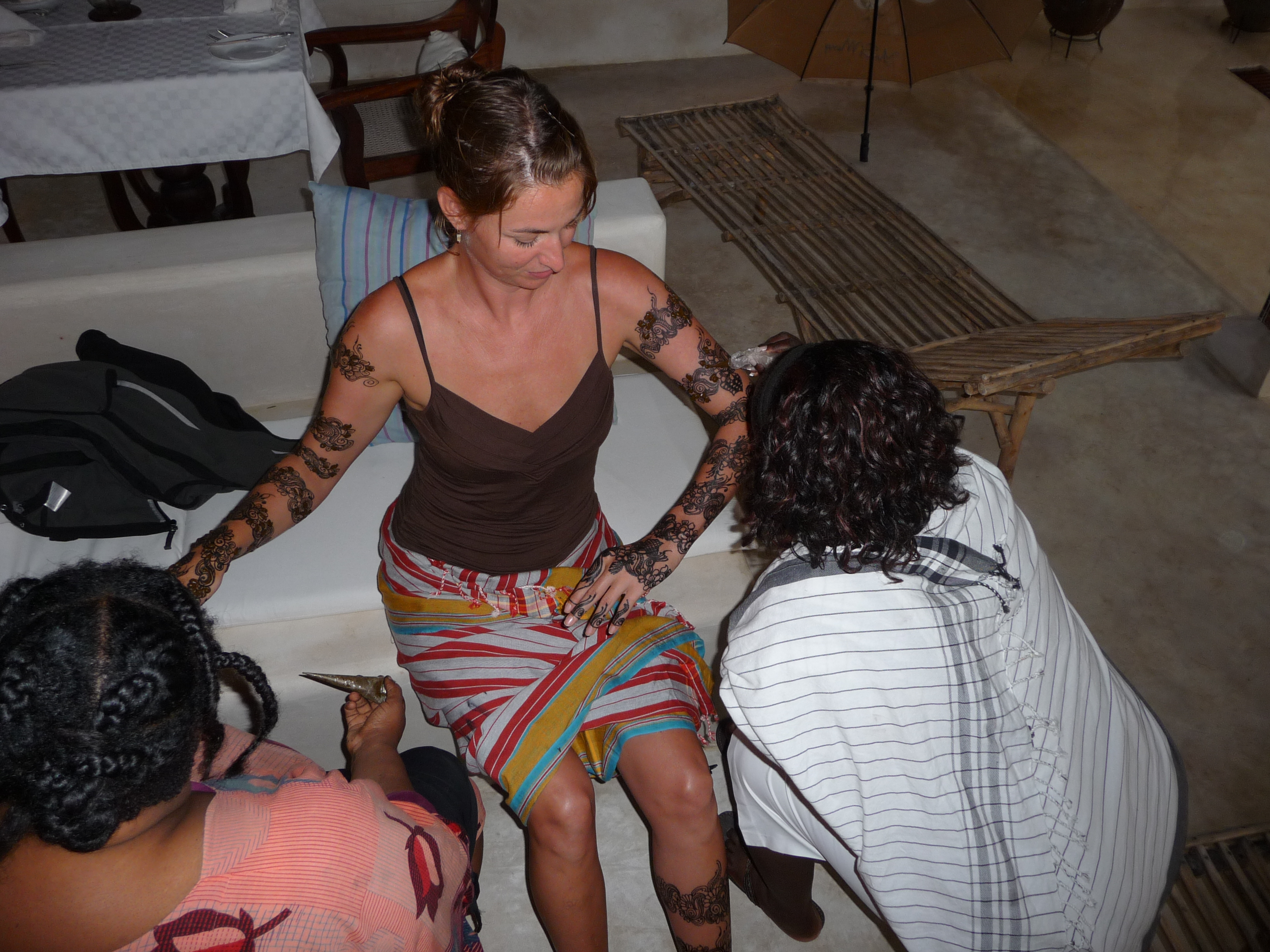 All along I was waiting to feel anxious or nervous but the morning of the big day arrived and still I felt that everything was under control. I still didn’t have a clue where the ceremony would be or who would perform it. I hadn’t gotten my dress from the tailor, maybe it would fit maybe not, Insha’Allah, but it was all such a relaxed event. 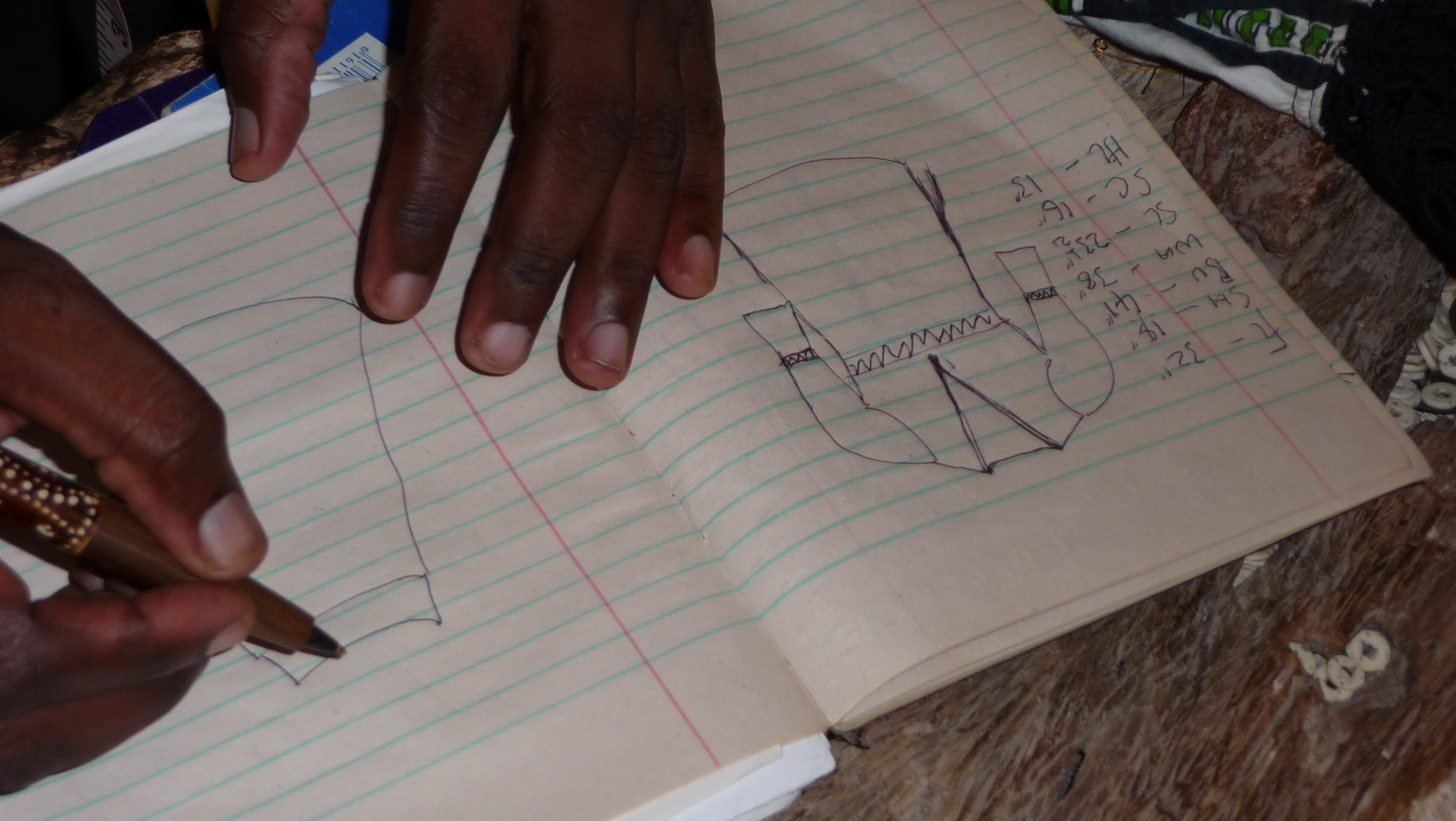 Walking out of the hotel in my white linen dress, through arched doorways with the dhows sitting on the water, a Swahili band playing, incense burning, the entire picture was completely surreal. Since the tide was low we had to walk along the harbor to the jetty to board the dhow they had prepared for us while groups of school children called to us “bibi harousi, wana harousi”,. The boat was totally decked out with flowers and palm fronds, cushions all over, and Jeff and I sat on the bow and enjoyed the band while they played the 45 minute journey it took to get us to Manda Beach. 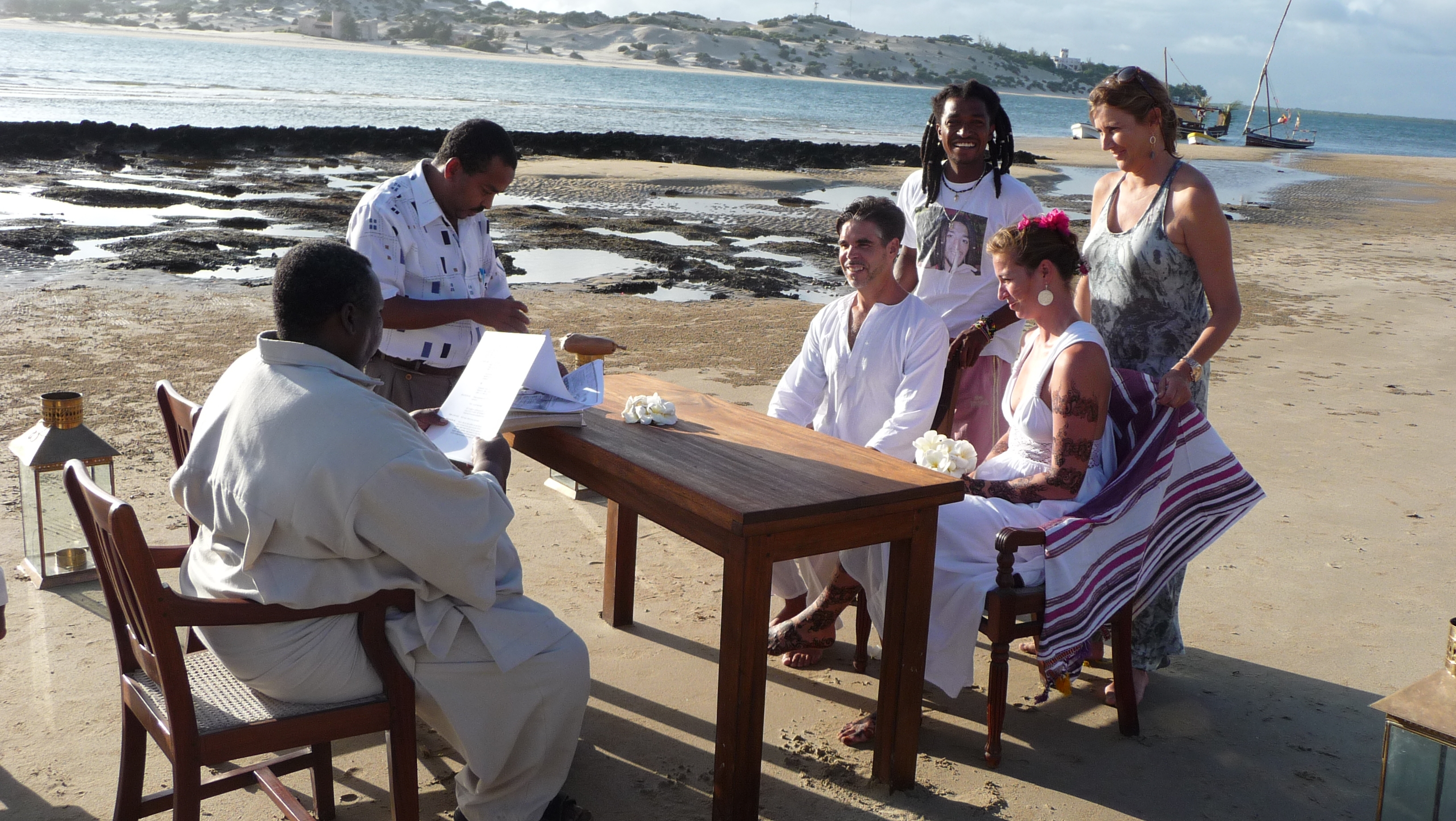 We got to this deserted beach with nothing but a table and lanterns set up. It was truly beautiful. The band came ashore and continued to play while we waited for the somewhat comical District Commissioner and his assistants to return with the papers they forgot back in town. The whole ceremony was a bit hilarious with this super serious man mispronouncing our names as he read through the ceremony. Jeff had a hard time understanding him as I’m sure he had with us and when it came time for Jeff to repeat after him Jeff thought he was speaking Swahili and started talking in gibberish. I couldn’t stop laughing. Marianne was my witness and Mohammed, the young rasta boat captain, was Jeffs. We had Suleyman, the 1 1/2 year old neighbor, as our ring bearer, and the staff of Lamu House who seemed to be enjoying the music and the event as much as we were. 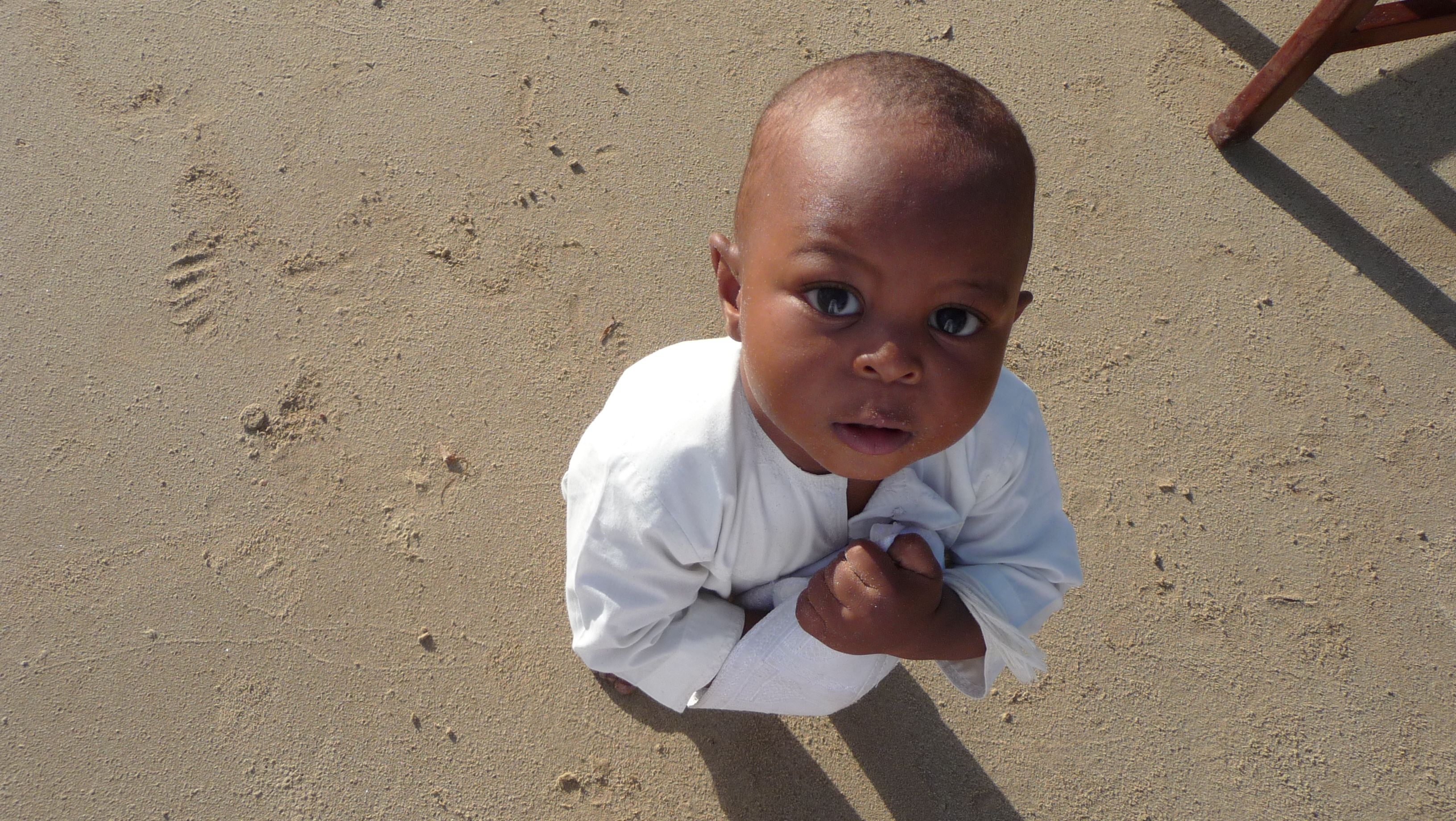 After a bit of dancing, some champagne and samosas for Suleyman we were back on the boat sailing off into the sunset. We anchored in the mangroves and Jeff and I just lye on the bow watching the zillions of stars and drinking wine while Juma prepared us dinner. We started with an octopus salad, moving on to crab, prawns, calamari, and lobster eating with our fingers as we listened to the cicadas and the water lapping at the boat Thinking all along, “what did we do to deserve this?” 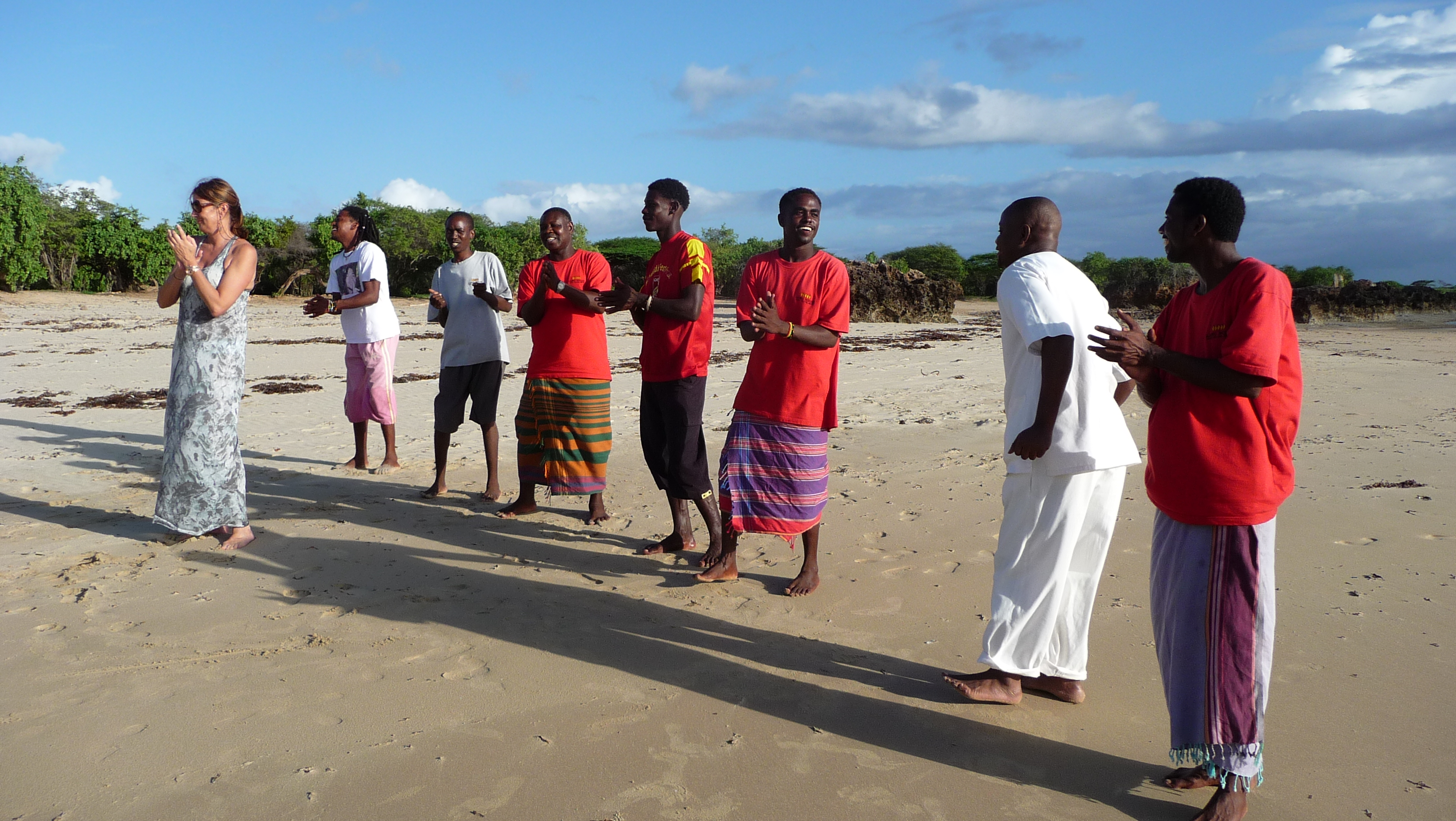 Frank and Marianne truly thought of everything and made this day for us amazing. Frank even took all the pictures and in my option did better then many professionals. We would like to thank them again for the entire week we spent with them, their hospitality and friendship is something we will never forget.

More photos of the bride

Click here to view the rest of our wedding photos.

And a gallery of non-wedding Lamu photos here.

We are currently in a hotel room in Nairobi preparing for a safari that will take us from Kenya, through Uganda, and into Tanzania. Our blog will be on hold while we partake on this 3 week journey. We promise to have lots of good stories and pictures to share when we return.