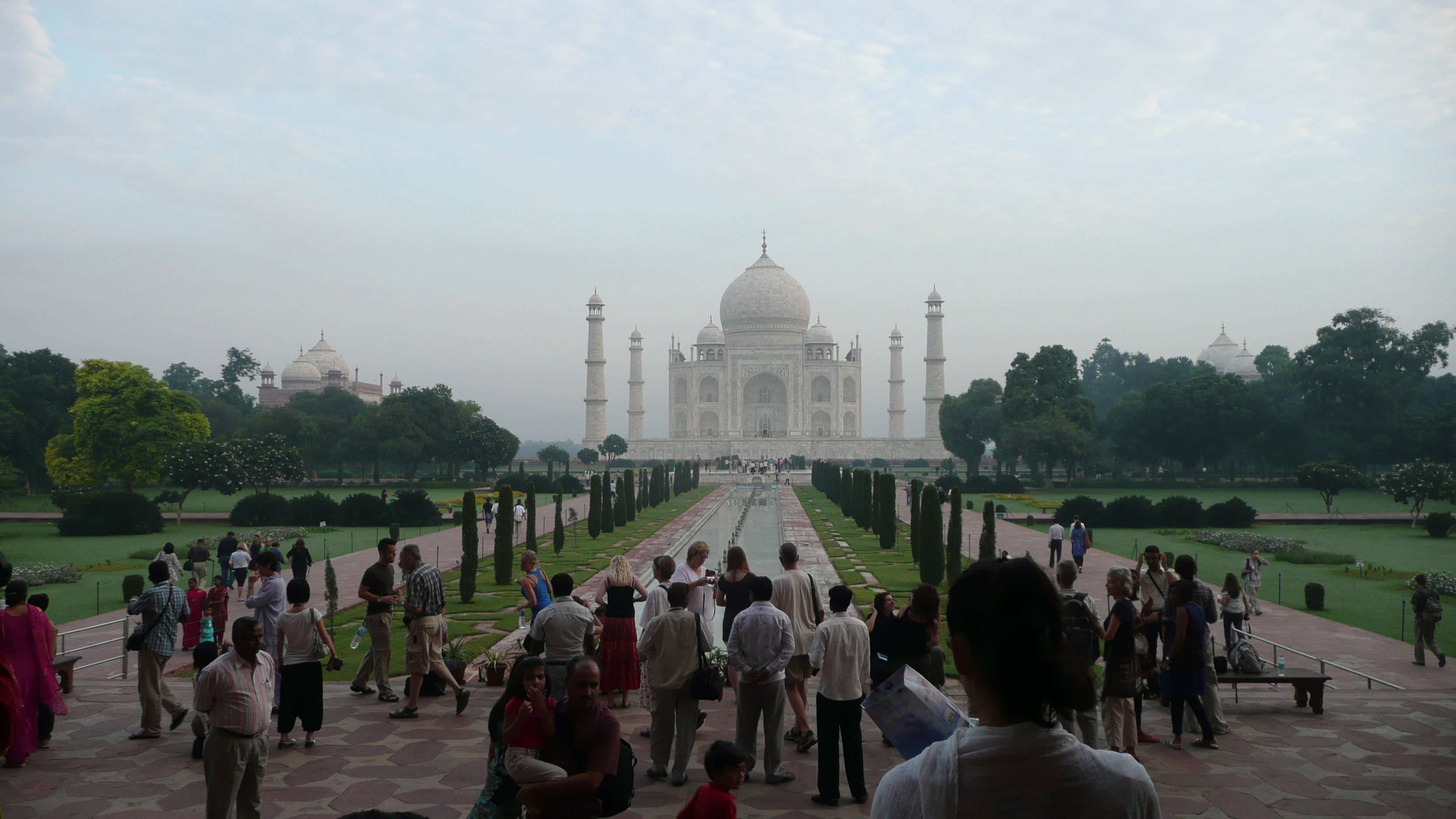 From Goa we caught a flight that took us further north into the Indian state of Rajasthan, the India that I had imagined in my mind when I first started dreaming about the trip. Old forts, lake palaces, elephants, spicy curries, and amazingly colorful people in beautiful costumes make Rajasthan one of the most unique places that we visited all year.

Our first stop was the lakeside city of Udaipur. The city is situated around a shallow lake that acts as a buffer to the grand palaces that sit in the middle only accessible by boat. The “Lake Palace”, once a retreat for the local maharajah’s family, and also the setting for the James Bond film Golden Eye, is now one of India’s most exclusive hotels. We stayed in the neighborhood adjacent to the lake at the Krishna Palace Guesthouse, a traditional haveli (Indian mansion), the interior decoratively hand-painted by the owner, a well known Indian artist once commissioned by the local raj. Lila took cooking lessons and added a few northern India dishes to her growing recipe box. We spent our days exploring the local forts, palaces, and museums and winding our way through the narrow neighborhoods full of shops and restaurants. Every once in a while someone would ride an elephant through town as bicyclist and tuk tuk drivers swerved to miss the pedestrian traffic. We spent our leisure time hanging out atop the many rooftop terraces overlooking the lake. 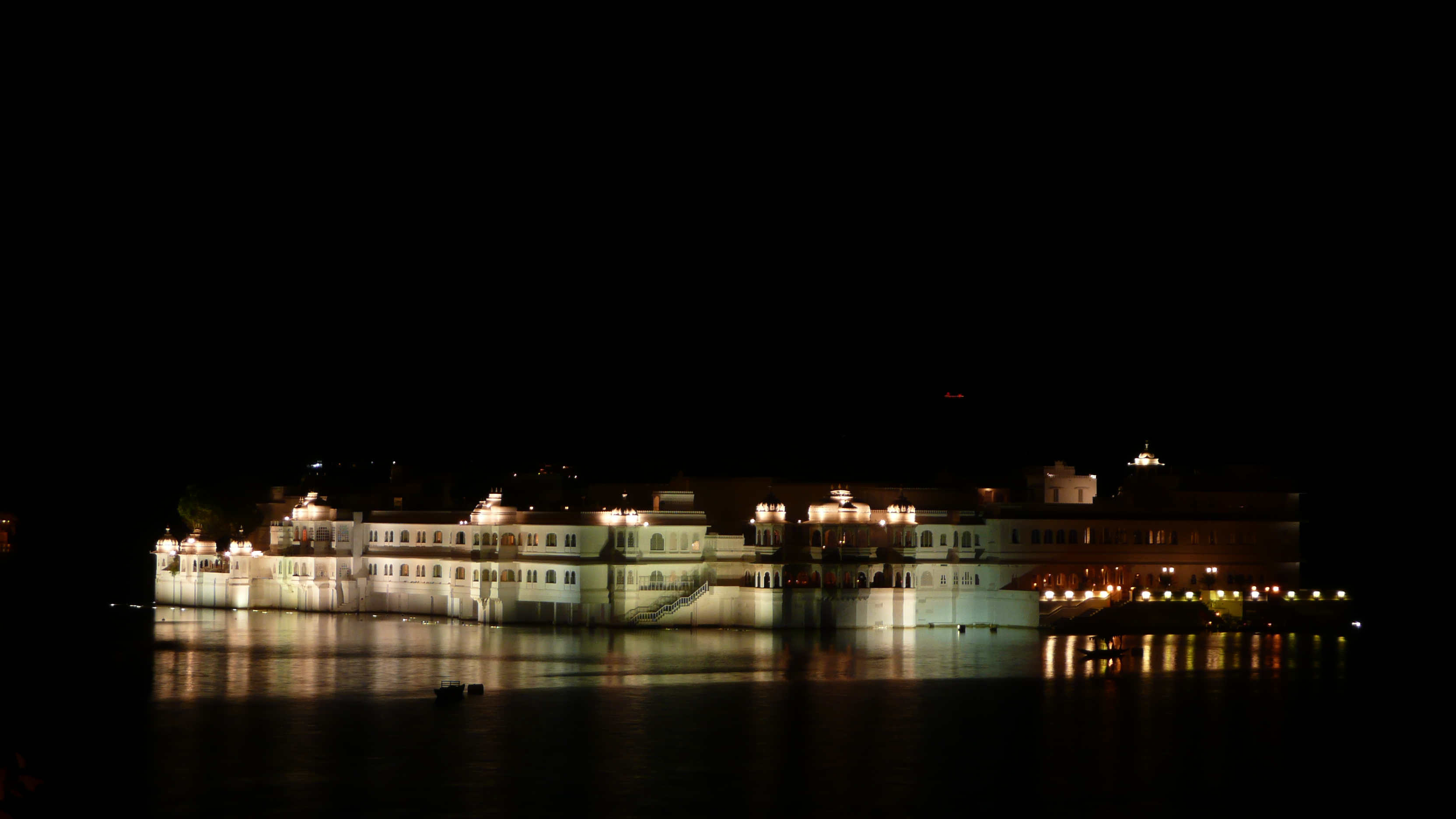 From Udaipur we took another eventful bus ride to the city of Jodhpur. On the way we were mesmerized by the change in scenery and people. The green of Goa behind us, the desert spread out before us. Boulders and cacti lined the roads and the normal assortment of distractions – cows, goats, dogs – played chicken with the bus around each bend. Lila, holding a little Hindi girl in her lap for a good part of the trip, noticed the change in the local clothing. The women adorned in bright colors and bangles up to their shoulders. The men wore mutton chops, big mustaches and even bigger and brighter turbines, each color significant in communicating, age, caste, and material status, amongst other things. 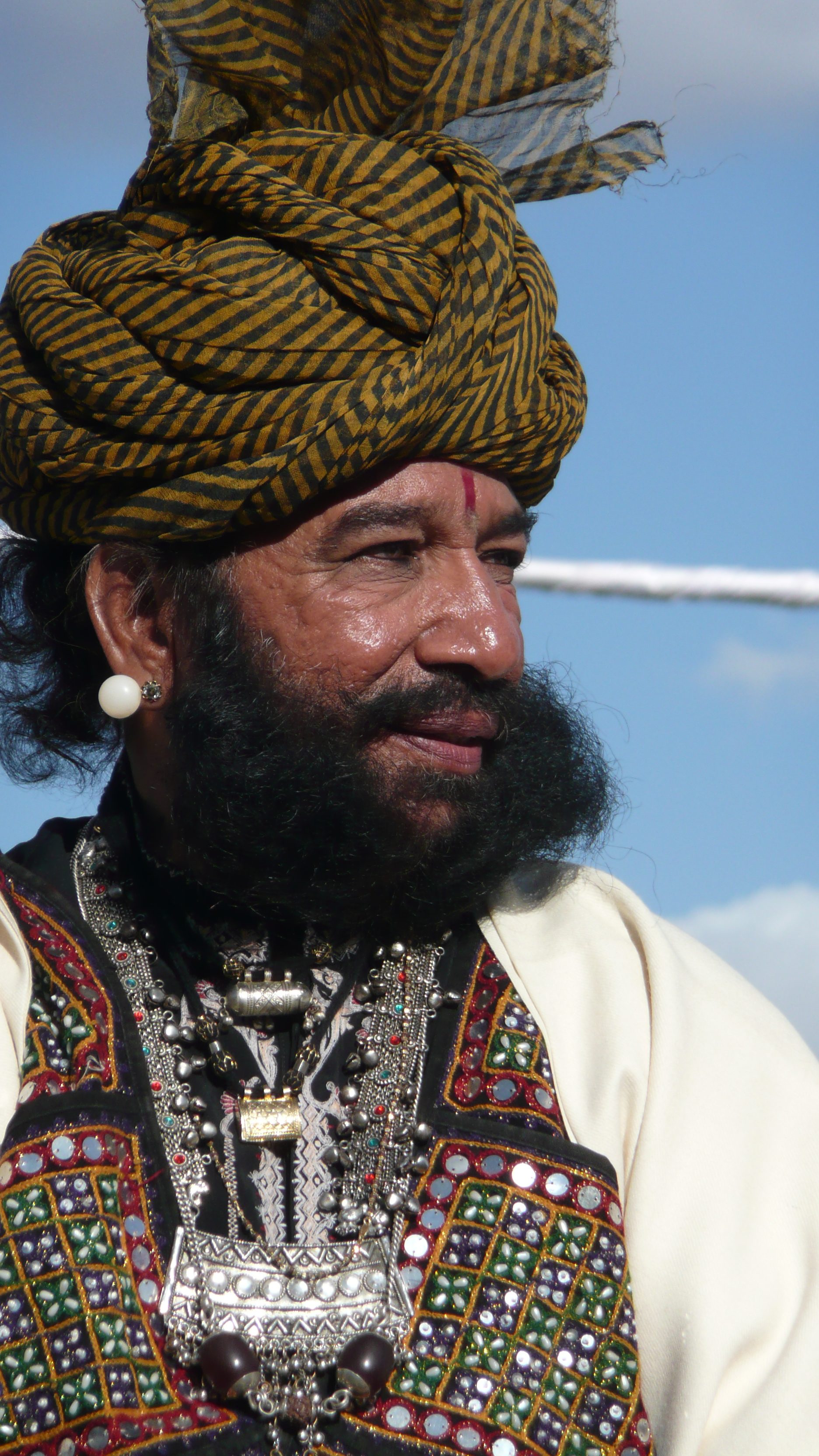 Jodhpur seems more of a working city than a tourist destination, but it turned out to be a favorite for a number of reasons. First and foremost was the beautifully up kept Mehrangarh Fort. The day we visited there happened to be a annual international music festival. Throughout the day we were treated to the sights and sounds of a number of traditional dance troupes and musicians who traveled from all over India for this event. We returned in the evening for a sunset concert outside the fort walls and then another performance inside the fort itself. We stayed at the Heavens Guesthouse, a pleasant family home-stay. Nisha, the owner, took a liking to us and invited us to join her at a local folk festival where we spent the afternoon admiring the amazing array of characters vying for first prize in a number of events, including turbine tying, a traditional raj costume contest, and tug-o-war. 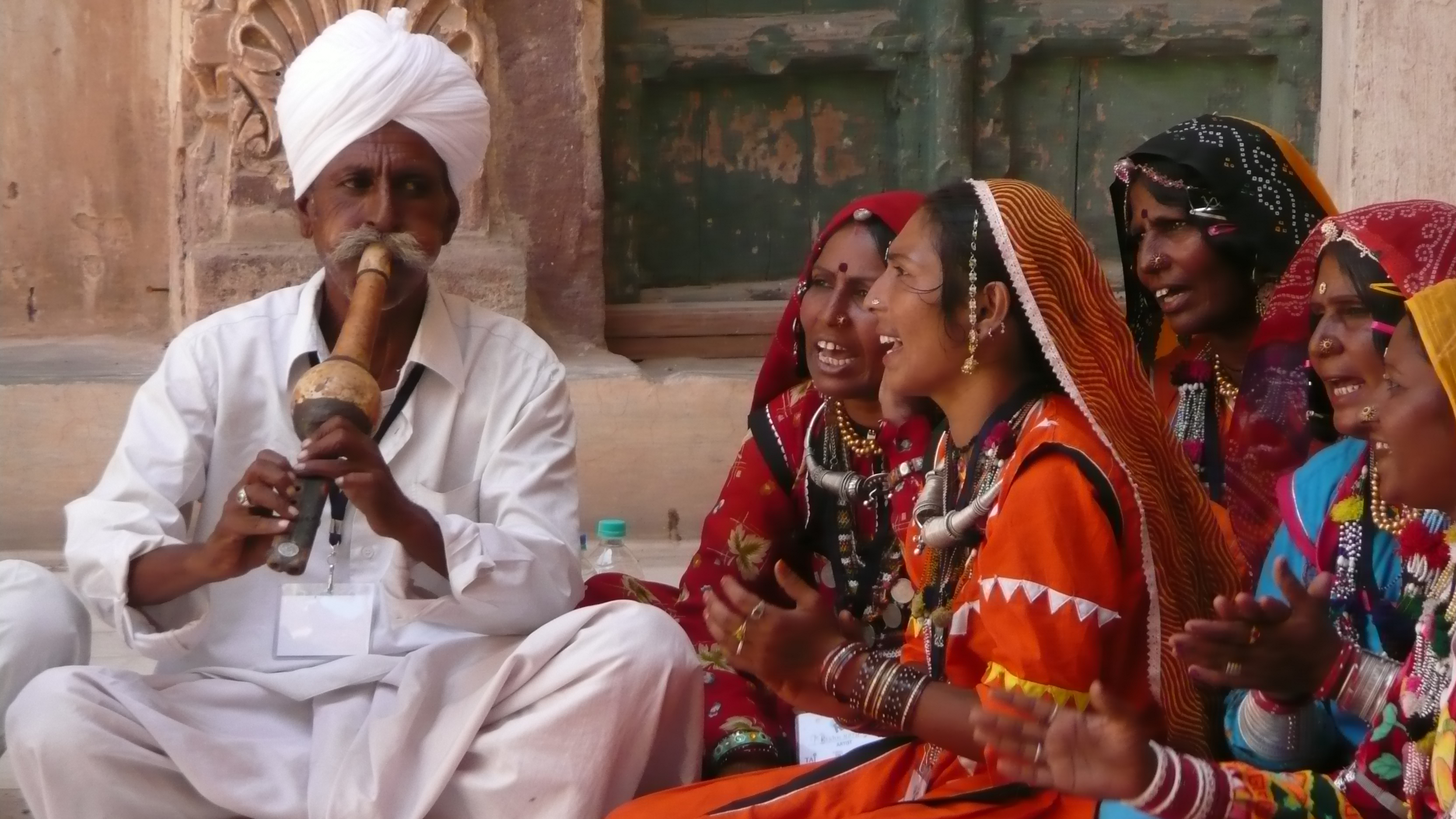 From Jodhpur we took a night train to the fort city of Jaisalmer. Arriving tired (around 5am) we were lucky when we checked into the Fifu Guesthouse, by far one of our favorites in India, and they had a room ready for us to return to bed. When we awoke we met Fifu and his brother, the most gracious hosts. During the day we visited the famous Jaisalmer Fort, the town inside still intact and full of shops, restaurants and narrow winding neighborhoods. We also visited the three Jain temples located inside the fort walls. The intricate carvings so unique and beautiful and different than the Hindu temples that we had visited in the south. (Jainism,based on a philosophy of non-violence, was spun off of Hinduism centuries ago in a revolt against the harsh Indian caste system. The most devout of the Jains do not believe in harming a single living creature. They wear white masks covering their mouths to avoid inhaling insects and are often seen sweeping the path in front of them to avoid crushing ants and other bugs beneath their feet as they walk.) In the afternoons we took refuge on Fifu’s rooftop terrace – a perfect escape from the dusty roads below, with a picture perfect view of the fort, good food, and endless lime sodas to cool us down from the scorching heat.

We spent our final evening with a Jeep tour into the surrounding desert with a friendly couple from London. An hour off-road, past herds of camels and small villages, we made our way into the dunes where our guides prepared us dinner as the sun set behind the hills. 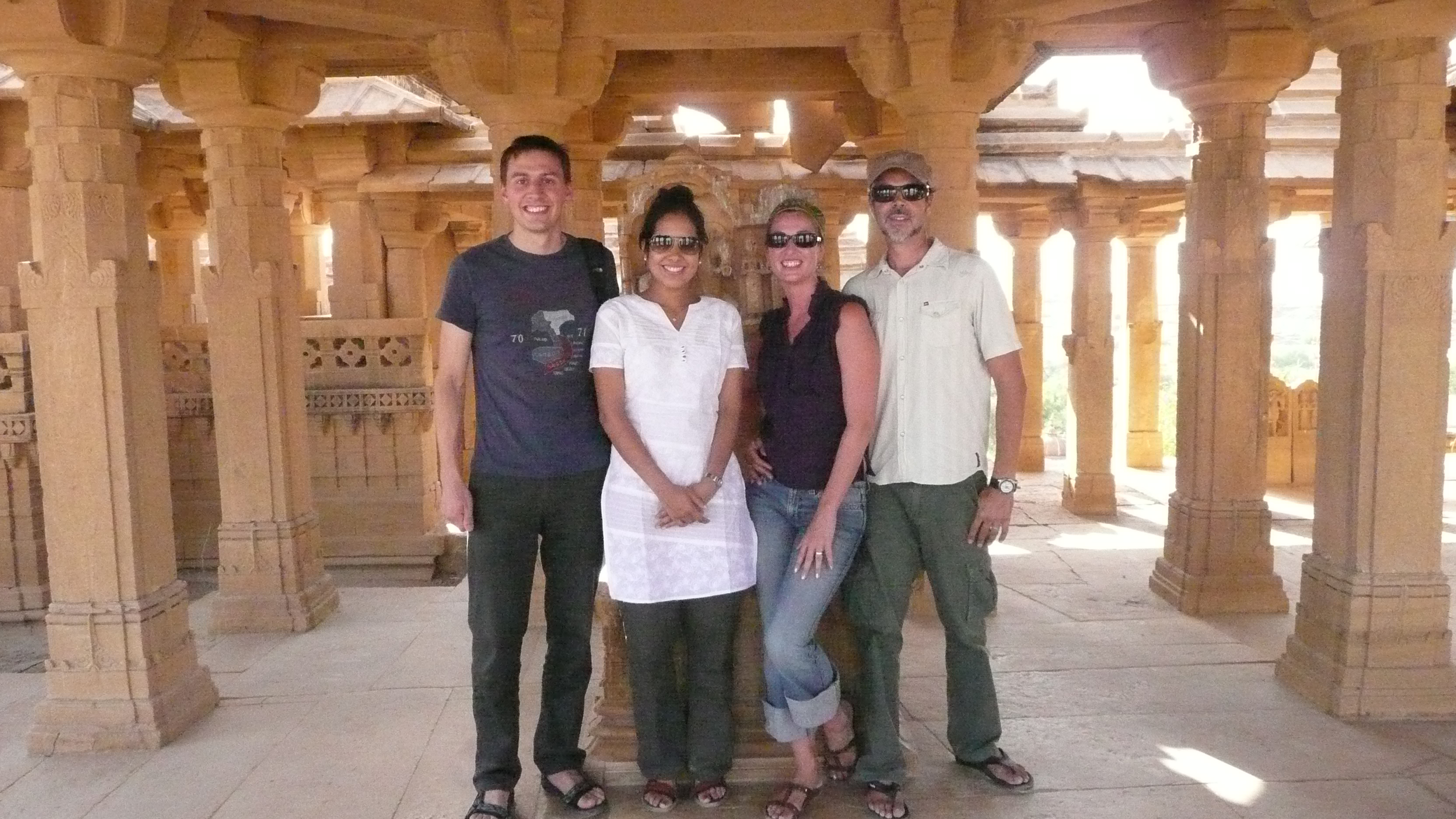 Another night train journey, kept company by my own little cockroach family this time, and we arrived in Jaipur, Rajasthan’s capital city. Hot, crowded, and crazy and we were quickly shocked back into Indian reality. Fortunately the food scene in India is never a let down, so we perused the city streets looking for the perfect chapati, samosas, and curries. The following day we visited the Amber Fort, just out of town, saw a Bollywood film at the Raj Mandir cinema, one of India’s largest and well known theaters, and Lila replenished her wardrobe with a few choice pieces from Anokhi, a traditional block print fabric boutique. 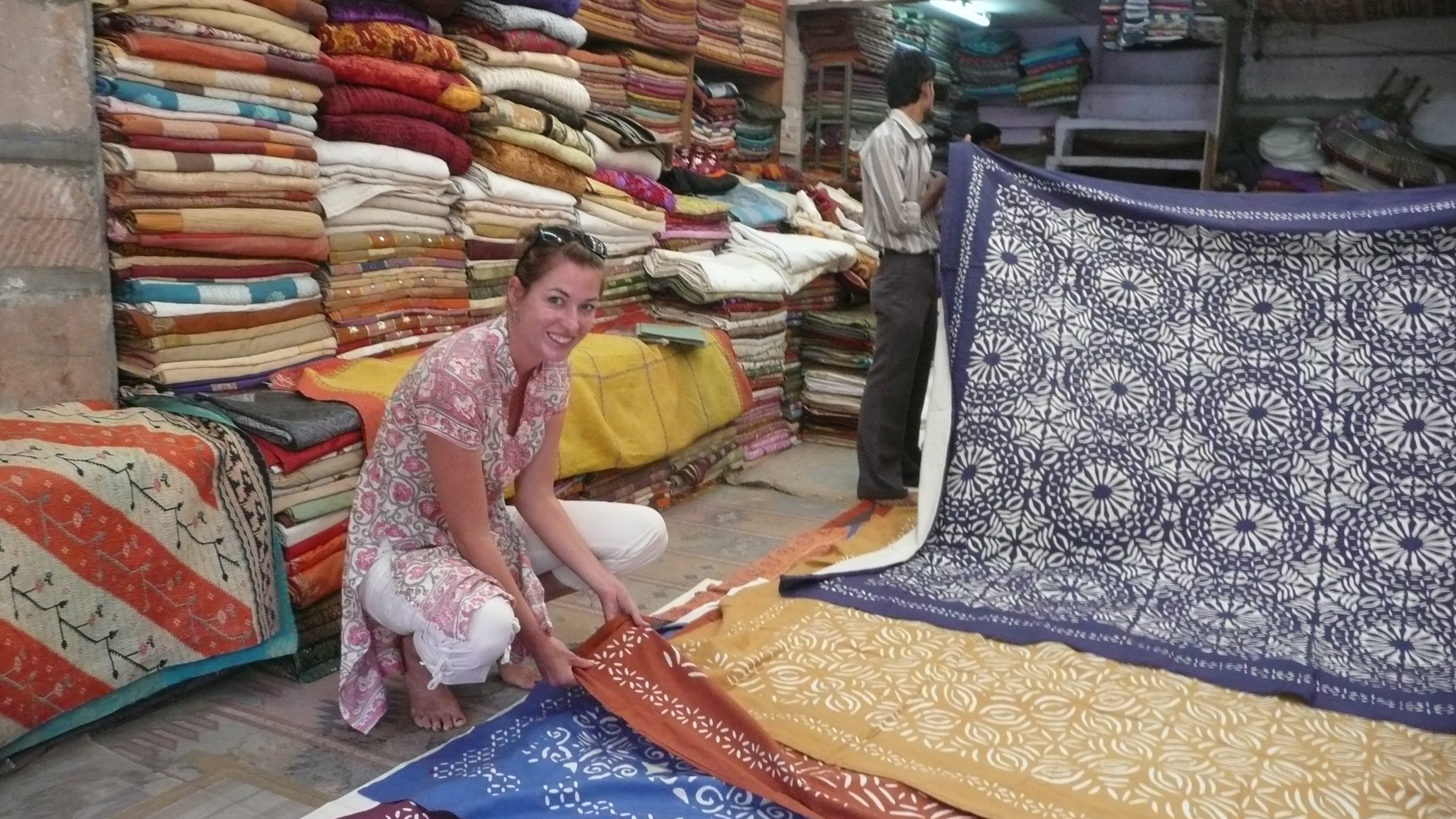 Yet another train ride, arriving after midnight this time, and we were in the city of Agra, home of the Taj Mahal, and apparently the breeding ground for the swarthyist of touts, but I won’t get into that as you can read endlessly about this on other peoples India blogs. The Taj was magnificent. That is the only word that can describe it. It was every bit as beautiful as we expected. Built by the Mughal Emperor Shah Jahan in the 16th century as a memorial to his favorite wife – Mumtaz Mahal, every detail is a testament to a love lost.

A final Indian train experience, this time on the day train, upon hard wooden benches, in a car full of men – and Lila. Needless to say, there was some serious staring, one thing that you never really get used to in India. Six hours later, however, and we arrived in New Delhi. I might have more to say about Delhi, but at this point Lila and I were feeling more than a little road weary, so we stayed in a suburb on the outskirts of town in a modern little hotel, with a hot shower, clean linens, and a flat screen TV. Awe the little things. The following day we made our way to the giant western style mall. I mean HUGE mall (apparently not everyone in India is poor), where we strolled around unharrased in the air-conditioned stores looking at an array of useless crap and generally just hiding from the overwhelming swarm of humanity outside – not that the mall wasn’t packed as well. Lila went to the spa for a facial, had a fish pedicure – thousands of tiny fish eat the dead skin off of your feet (very strange, but popular in Asia). You should have seen her face. The following evening we boarded a flight for Thailand.

Lila gets a Fish Pedicure at the New Delhi Mall

There is no real was to wrap up my feelings about India at this time. It is one of those countries that I haven’t fully absorbed. As beautiful as India is, at the end of your trip I think that there is a need to wash away the weeks of dirt and grime and some of the things that you have seen and to give it a rest for a bit. For every beautiful palace and temple, there is a heartbreaking reminder of the poverty in this country of nearly a billion people. The children growing up on the streets without parents, the dead dogs along the roadways, the morning bathroom huddle along the train tracks because the slums have no plumbing, the endless beggars with missing limbs and gaping self inflicted wounds, their only source of income in a country that believes that your lot in life has more to do with your karma than with a culture haunted by centuries of caste discrimination and imperialism.