We landed in Hanoi in the afternoon and took a taxi through the countryside and into the city center. Passing miles of lush green countryside, water buffalo wallowed in the mud, workers in pointy hats were bent in half tending to the rice patties that stretched before us. My first thought was that this is exactly what I had expected, or at least what I had seen in numerous films about Vietnam that permeated my childhood. I was always curious about this place. My stepfather Tom served during the war, so this was a one of the strange lands that I had dreamed of visiting since I was a boy. 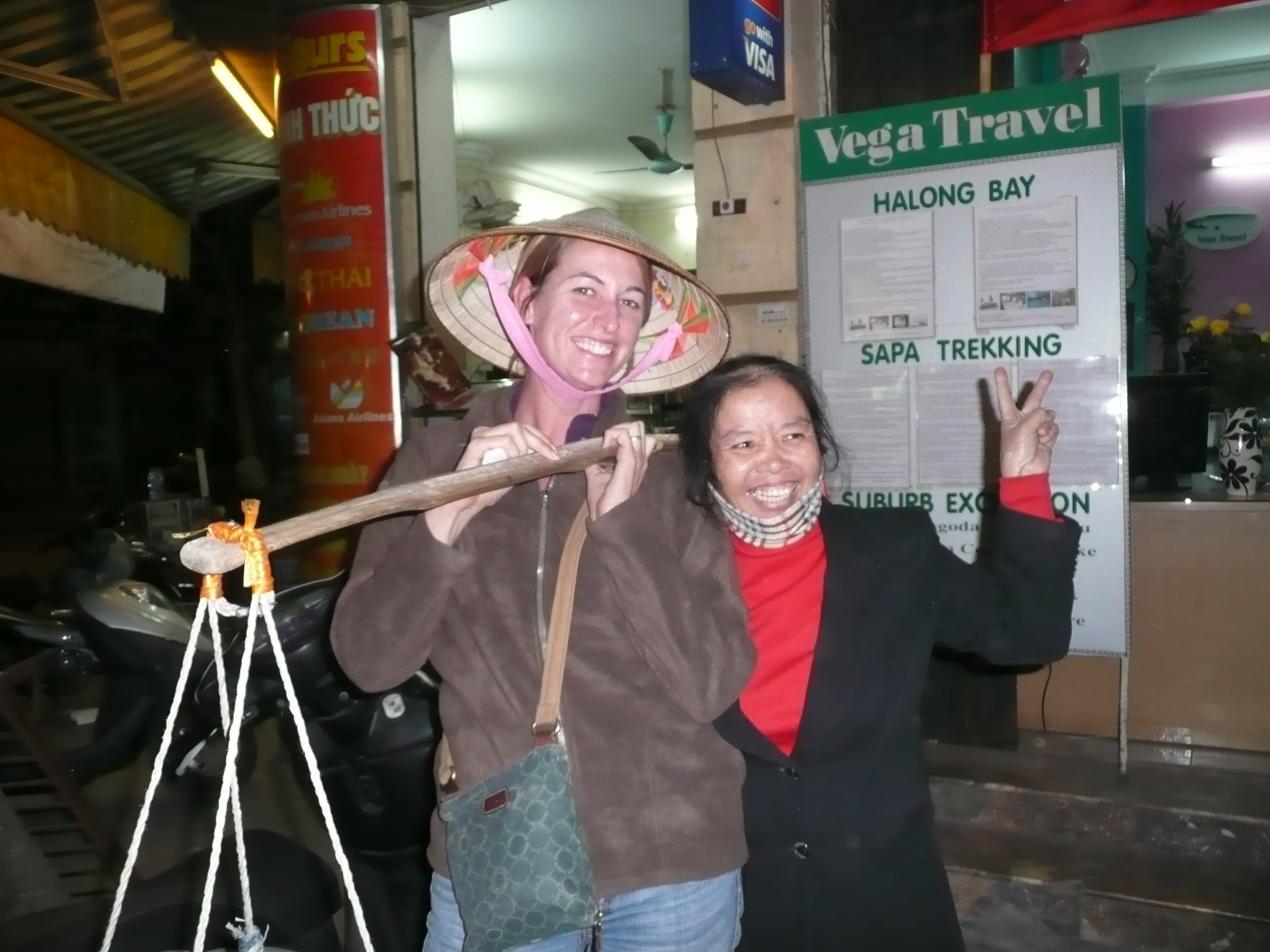 We took the first room that we found, the bed so close to the bathroom that you could barely open the door, but it would do. Eager to explore the city, we hit the streets right away. They were bustling. Scooters by the hundreds ebbed and flowed around those brave enough to cross the streets. People scurried about, side stepping the makeshift restaurants that lined the sidewalks, often consisting of nothing more than a squat table with kid sized stools and a giant pot of pho balancing at the end. We sat down and ordered two. Fifty cents a piece. Sweet and strong Vietnamese coffees, finger sized banh mi sandwiches with pork pate and crispy shallots (for a dime!), and fried imperial rolls whet our appetites. The last night we wondered into an alley way and stumbled upon an impromptu barbecue where we shared charred meats and Vietnamese whisky with the hoards of young hipster kids that made up the clientele. Were we in Heaven? 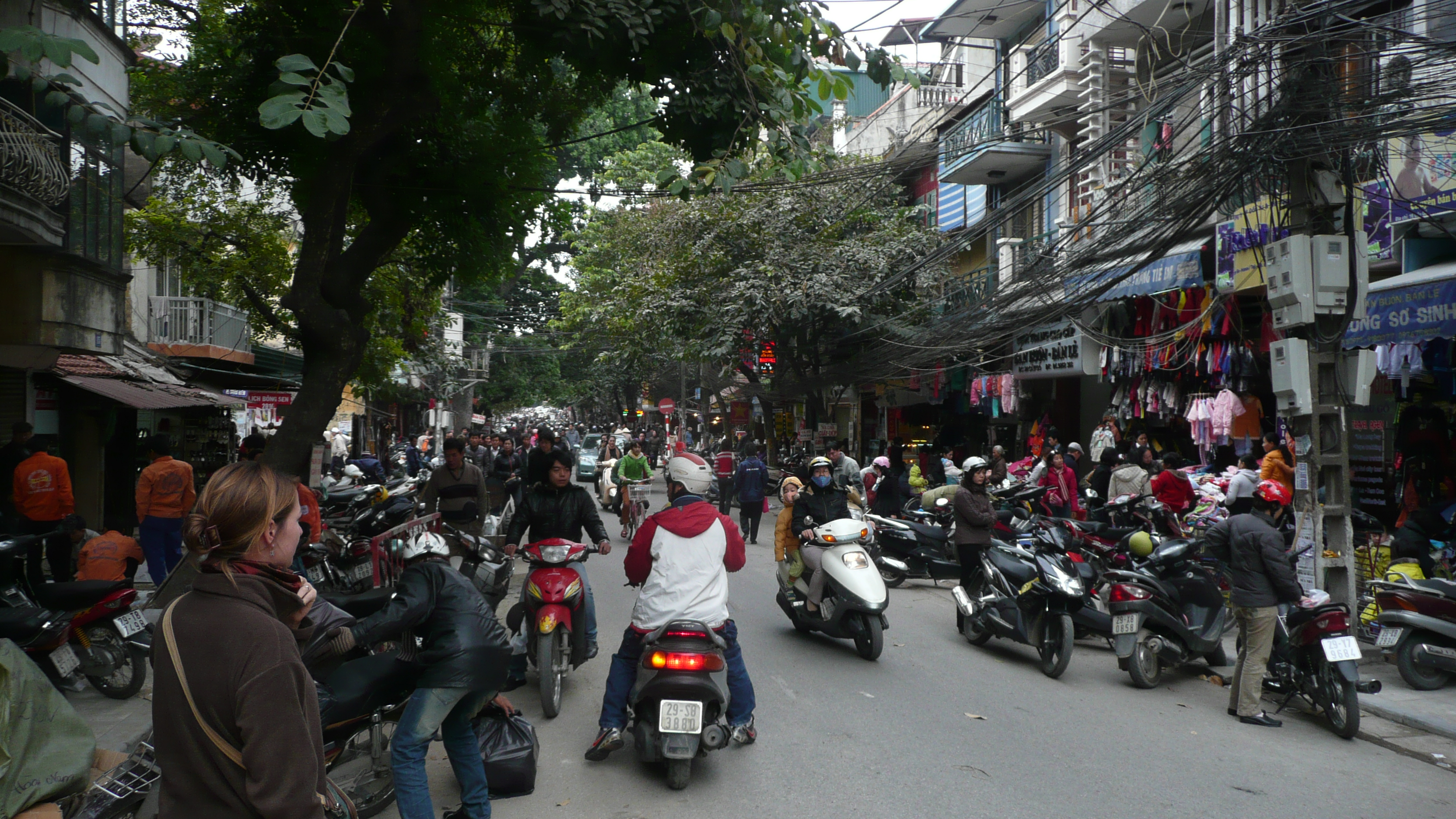 For several days we wandered endlessly, criss-crossing the city between the French quarter, defined by wide avenues and beautiful colonial architecture, and the old quarter with it’s winding streets and endless alleys full of cluttered shops brimming with interesting nic nacs stacked to their ceilings. Nearly every block had a temple, incense wafting through the air burning to effigies of Buddha or the ancient ancestors. The Chinese brought their traditional religions to Vietnam when they ruled over this land, for more than a thousand years. 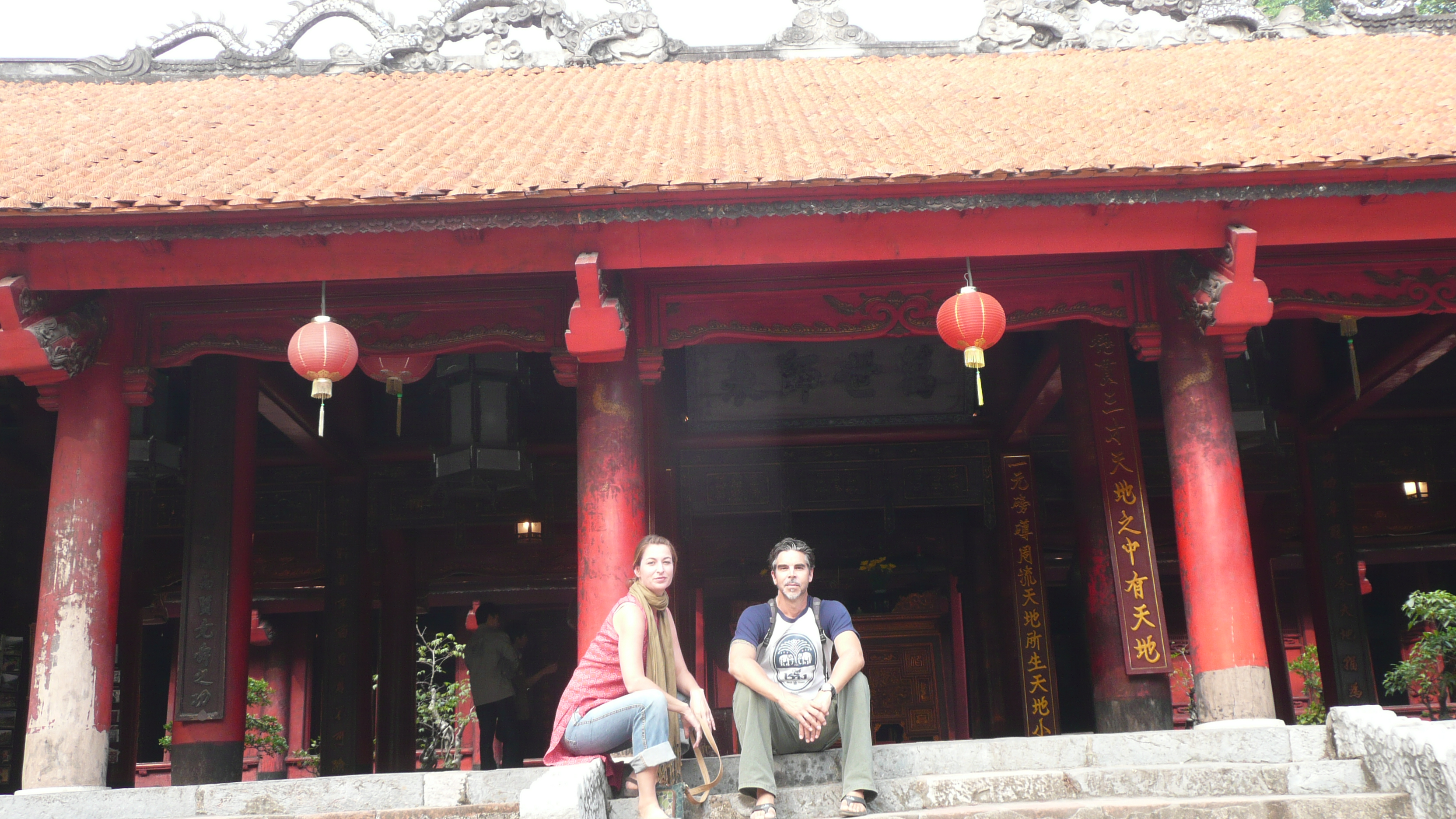 After a few days we booked a trip to Ha-Long Bay. Lila and I had been dreaming of this mythical landscape since we first came across photos years ago. When we arrived it was hot and humid, tourist gathered by the droves on the dockside awaiting to board their boats. Once away from shore, we were not disappointed. The blue green water spread before us and we drifted towards the iconic karst towering over us. They seemed to explode from the floor of the bay. Floating villages dotted our path. The bays inhabitants sold fish and other supplies from small wood boats. The next morning we dropped into a kayak and explored the terrain up close. Paddling into caves carved from years of erosion, we careened our heads back to take in the stalactites dripping from the ceilings. It was truly a magical place that even Peter Jackson could not do justice to. 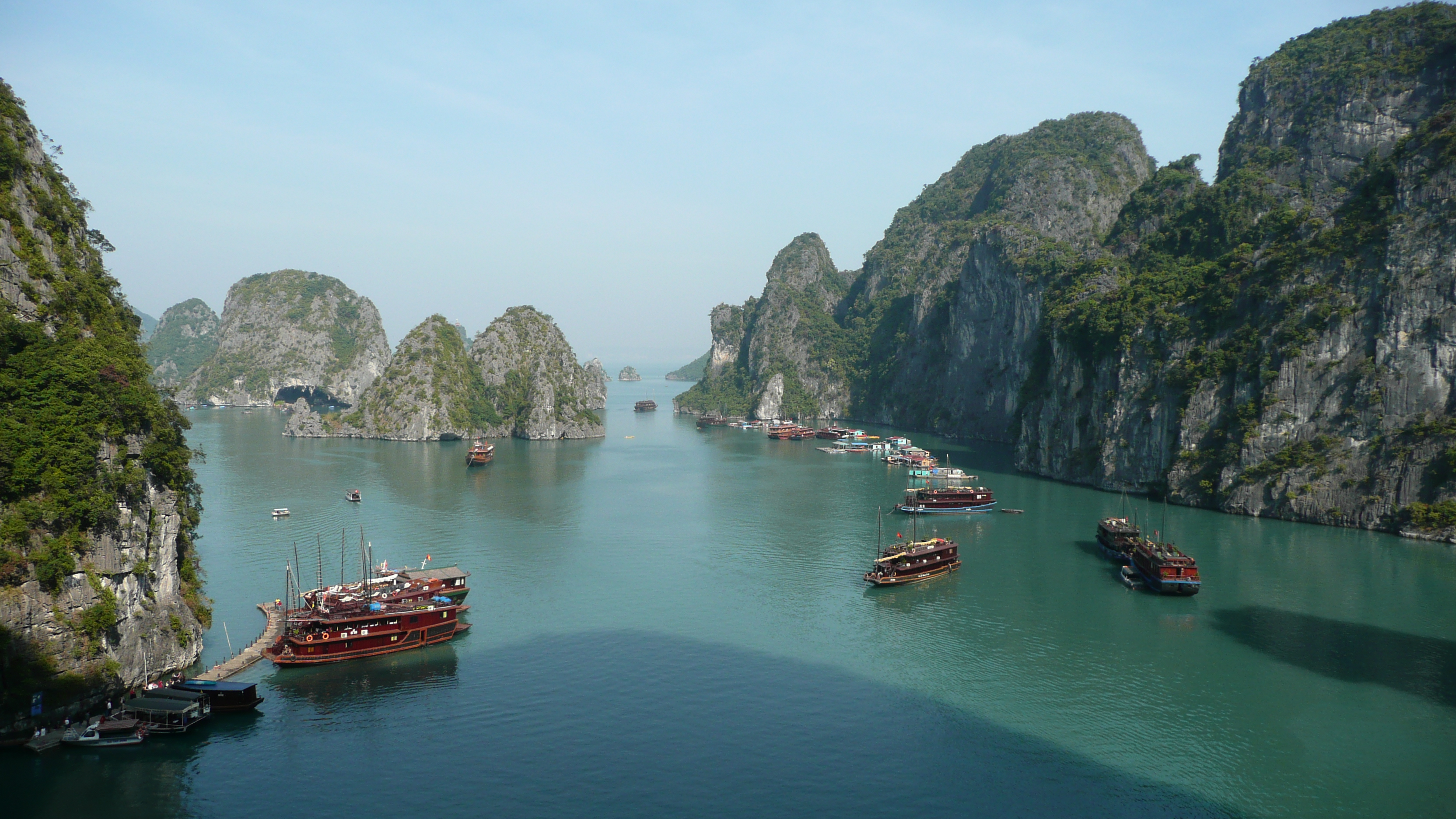 Back to Hanoi just in time to catch the night train to Hue, the former capital to Vietnam. Hue is best known for it’s majestic temples, pagodas, and tombs, as well as the remains of the ancient citadel. We spent the better part of three days visiting the sites, taking in the history of a civilization seeped in the traditions of so many cultures that have come together to influence the art and architecture after centuries of conflict. On the last day we boarded a dragon boat (a real one!) twisting and turning our way up the Song Huong or “perfume” river, passing villages that lined the shoreline. Village kids frolicked in the shallows. We stopped along the way to visit many beautiful pagodas only accessible by boat. 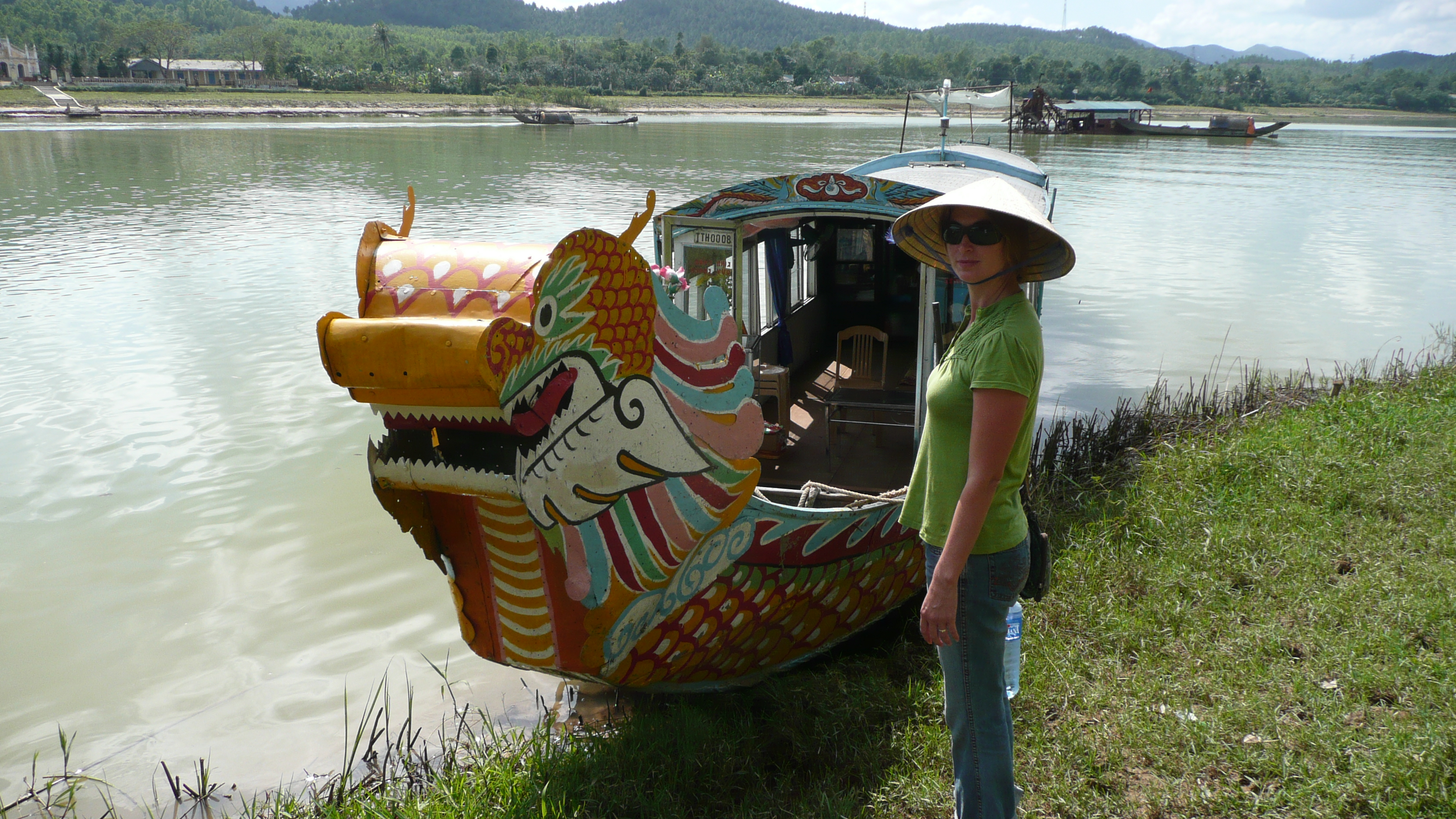 Next stop the charming city of Hoi An. The small traditional city, a once thriving spice trading village, is located just in-land from the South China Sea. We arrived just before sunset on the eve of the “lantern festival”, the locals floated paper lanterns glowing with flickering candles and flower offerings down the small river that ran through town. Lila and I paused on the walking bridge that arched over the river and watched the festivities before heading further into town for the first of many mouth watering meals. Today Hoi An is known as one of the culinary hot spots of Vietnam, Banana flower and prawn salad was a newly discovered delicacy for me. In addition to having an amazing food culture, Hoi An is also the place to go if you are looking for handmade clothing. Seamstress shops lined the streets, barkers shouting from their doorways in an attempt to bring you in for a fitting. Lila couldn’t help herself and had a custom embroidered jacket tailored just for her. 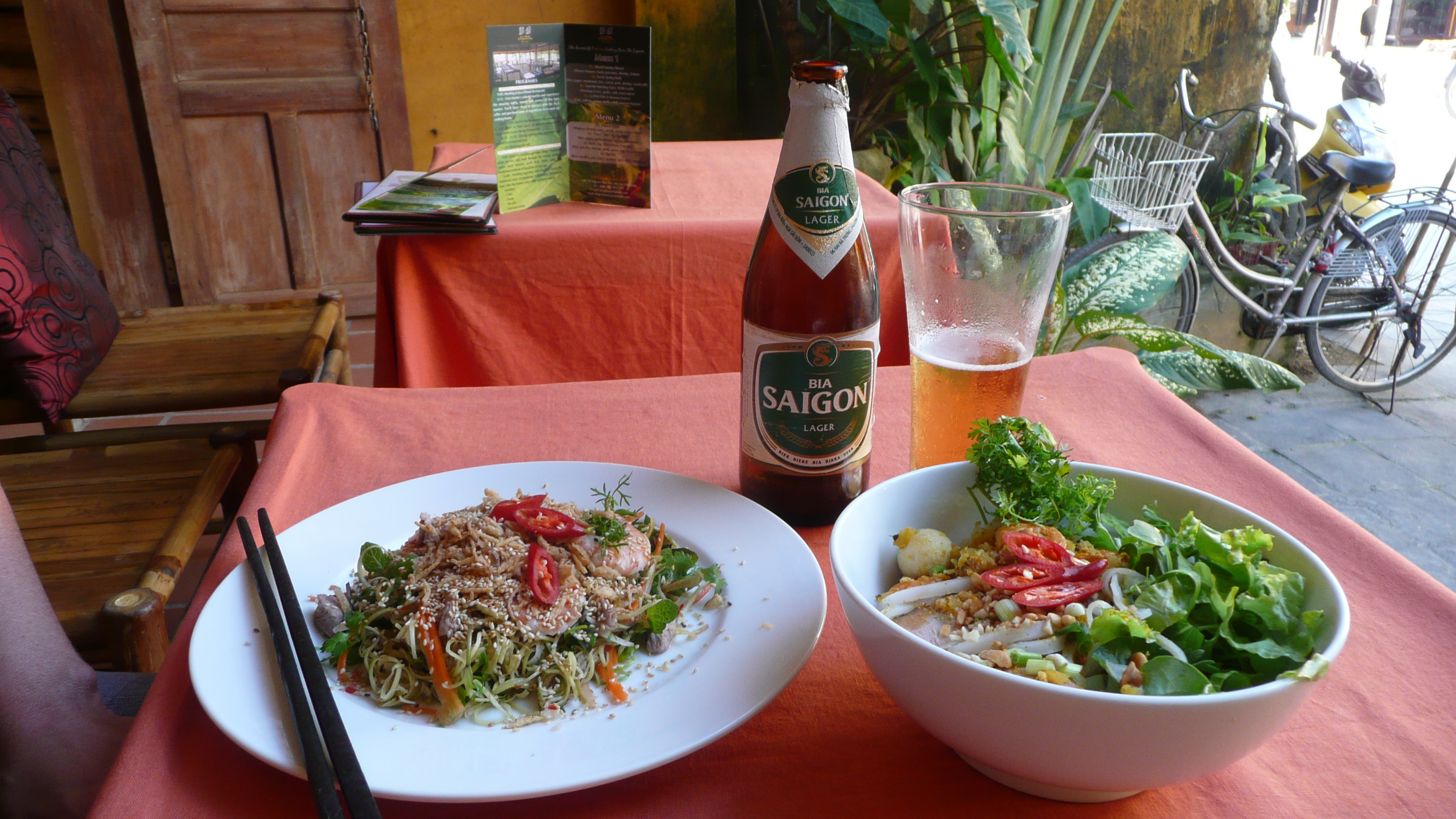 Our final stop was Ho Chi Minh City, once known as Saigon before the “American” war. A sprawling metropolis, HCMC is the largest city in Vietnam. We stayed in the Pham Ngu Lao neighborhood, modern and mainly catering to the western backpacking crowd. We walked the city block by block, putting miles on our already tired feet. One memorial highlight was the War Remnants Museum, full of sobering imagery and artifacts. A grime reminder of the part our country played in this now peaceful country. 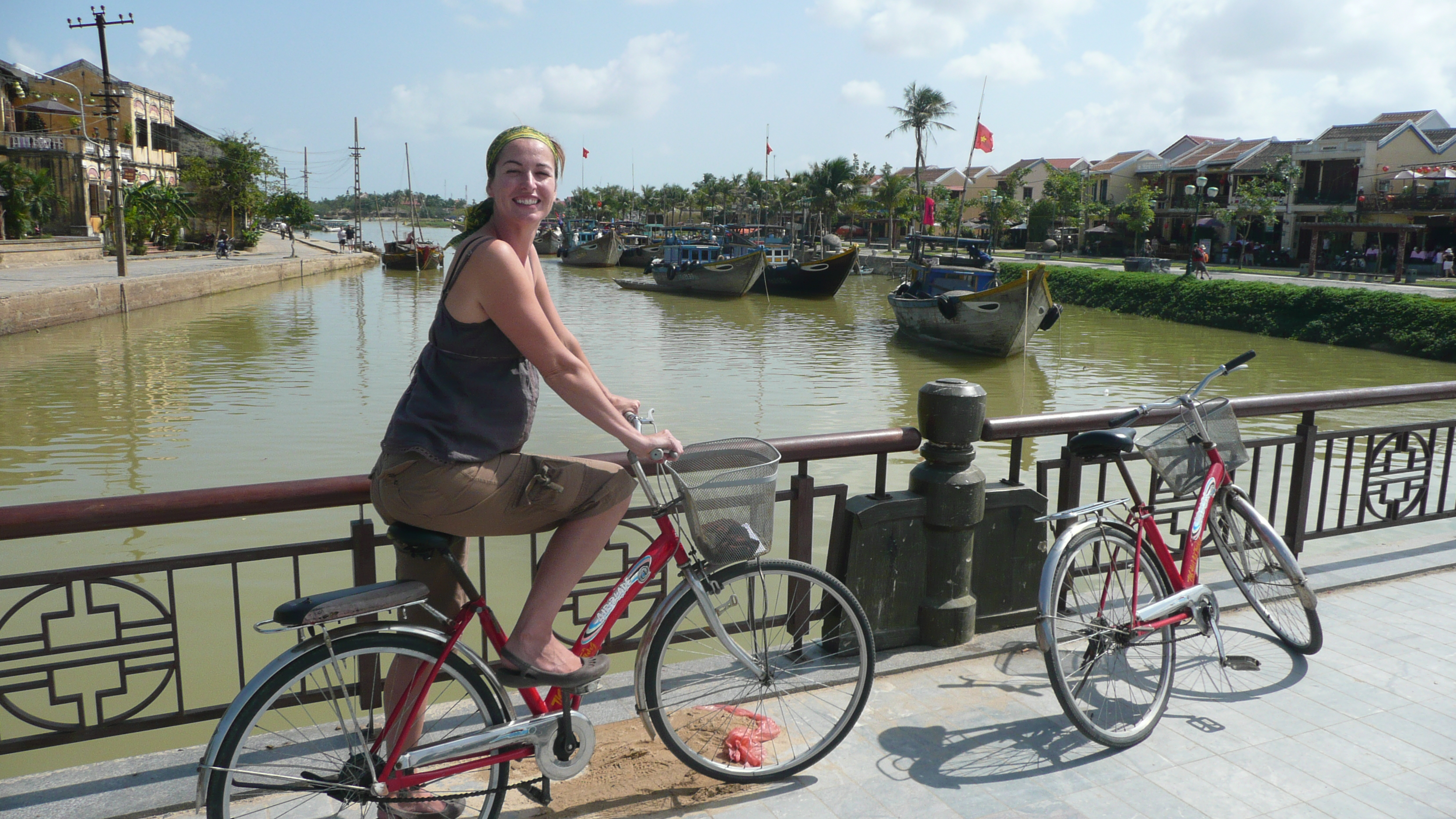